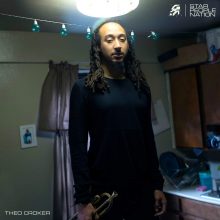 Jazz trumpeter Theo Croker continues the success of his two most recent releases—Afro Physicist (2014) and Escape Velocity (2016)—with his ambitious new project, Star People Nation.  The genre-defying album is Croker’s personal exploration of “the everyday rituals of blackness,” fusing elements of African percussion, American jazz, Caribbean reggae and more to reflect the plurality of his identity and Afrodiasporic experiences. As the title suggests, Star People Nation draws upon legends of extraterrestrials that came to Earth, encapsulated in a poem by Justin Emeka (from the liner notes): “Somewhere there’s a star child, gazing in the sky/On the verge of madness, but not really knowing why/They are reaching for a dream, that was poisoned with a lie/They are searching for a song, that might teach them how to fly/Play the songs of a star nation.” Perhaps this is a continuation of Croker’s fascination with Afrofuturists, but whatever the case may be, he never flags in his quest to expand our musical horizons.

On the intro of the opening track, “Have You Come to Stay,” Croker adds heavily sampled otherworldly voices to the mix, setting the mood for his celestial exploration. “Getaway Gold,” featuring vocalist Rose Gold,” employs a Mellotron and multiple keyboards for special effects, with additional textures from drummer Kassa Overall, known for his experimental fusions and forays into hip hop. On the lead single, “Subconscious Flirtations & Titillations,” Croker takes control of synths and sequencing, over which he layers and distorts trumpet passages in a seductive narration. Other highlights include “Alkebulan,” featuring intricately layered African percussion from Overall and Eric Harland, and the closing track “Understand Yourself,” by rising Jamaican reggae star Chronixx. Incorporating samples from Marcus Garvey’s “Know Yourself,” Chronixx’s anthem is a call to the “children of Afrika” to “organize and centralize” as “only the strong will dewesternize.”

Star People Nation continues Theo Croker’s sonic explorations, allowing listeners to experience the boundlessness of his creative pursuits. With this album, he also seeks to “inspire others to embrace themselves, their experiences and their community.”