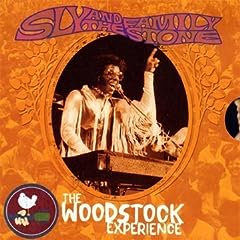 Woodstock Music and Art Fair, three days of peace and music . . . three days that changed the history of rock and roll. August marks the 40th anniversary of an event that symbolizes a generation of youths whose voice, actions, and culture was paramount in a socio-cultural revolution that was shaping America. Just when we thought that the proverbial Woodstock cow had been milked, a smattering of new releases are cropping up, including Sly & the Family Stone’s full festival performance. The original motion picture soundtrack that was released in 1970 only gave audiences a compilation of the artists featured at Woodstock, and in the case of Sly was limited to a three song medley that was by far one of the highlights of the soundtrack. The new release, The Woodstock Experience, is a two CD set featuring the full nine song set paired with the studio album Stand! At first glance I wondered why the studio album was paired with the Woodstock set, but after quick investigation I realized that Sly’s invitation to Woodstock generated from the success of Stand! (including the number one hit “Everyday People”), released the previous May. Scheduled for a three a.m. Sunday morning time slot, Sly & the Family Stone took the stage at Woodstock and delivered a powerhouse of gospel, soul, and funk that brought rock and roll church to nearly half a million concert goers.

Formed in 1966 by combining Sly’s and his brother Freddie’s bands, Sly & the Family Stone broke barriers and brought many innovations to popular music. Sly Stone’s time as a disc jockey at San Francisco’s R&B station KSOL and as a producer at Autumn records gave him an idea of what it would take to break through successfully in both the music market and industry. The group broke both racial and gender barriers as they soared their way up the charts. They were not the first integrated group on the block by far, but they achieved crossover success like no other groups before. The Family Stone also featured women in lead roles playing instruments other than vocals. Stylistically the group brought a mixture of gospel, early funk, soul, and rock to the table along with an outlandish fashion sense. Lyrically, they sung of peace, love and understanding which was crucial during this period of socio-political upheaval in America. Sonically, the group utilized the technology of the times with heavy fuzz, distortion, and Wah-wah.

Vocal arrangements for The Family Stone were unique and revolutionary; the group had four lead singers who traded various bars of each verse and a horn section that provided a backdrop for the vocals. And then there was bassist Larry Graham, who brought new tonality to the bass guitar with what he called “thumpin’ and pluckin’” (now known as the slapping technique). He also used a doubled bass technique, where he would send the bass signal through two separate amps, giving it a fuller sound and blowing the doors off the bottom end. A good example of this technique can be found during the bass breaks in “Dance to the Music;” Graham is running clean bass through one amp and a distorted bass through another. By 1969 the group was at the peak of their career and their performance at Woodstock would endear them in the hearts and minds of those who attended.

The new release is spectacular; it’s almost a crime that it has been kept under wraps for 40 years. The sheer energy in the performance translates through the recording, which was captured masterfully by famed engineer Eddie Kramer on location and also mixed by Kramer for the new release. Pairing the Woodstock set with the album Stand! was ingenious not only because Rolling Stone rates it as # 118 of the top 500 albums of all times, but because in comparing them side by side you really get a feel for just how incredible the group was live. The CD features six previously unreleased tracks including the adrenaline-charged renditions of “M’Lady,” “Everyday People,” “You Can Make It If You Try,” and “Sing a Simple Song.” “Sly’s set was high energy and infectious,” remembers Woodstock co-producer Michael Lang. “They were the most colorfully dressed act on the bill and they came dressed to party. Sly and the Family Stone were definitely the act that most of the other bands on the bill were focused on seeing.”

This compilation is part of Sony Legacy’s Woodstock Experience series, which includes five of the biggest performances at Woodstock: Sly & the Family Stone, Janis Joplin, Jefferson Airplane, Johnny Winters, and Santana. Each two-CD set consists of a classic 1969 studio album from the featured artist along with their full festival performance. All are packaged in eco-friendly sleeves that replicate the original studio album cover and include a 16 X 20 inch double-sided fold-out color commemorative poster. Woodstock was an electrifying moment in the latter half of the 20th century. We are blessed that the event organizers had enough foresight to document it as well as they did, and its anyone’s guess what will come out of the woodwork for the 50th anniversary.