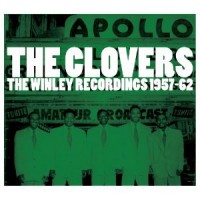 This is a strange compilation that seems to be one producer’s way to reissue a bunch of old doo-wop singles.  Luckily, the music is quite good so the listening is easy.  Despite the title, only 8 of the 18 songs are actual Winley Records singles recorded by the 1961 incarnation of The Clovers. Two more sides are from a split-off of the Clovers called the Fabulous Clovers, which remained with Winley after the rest of the band signed with Atlantic in 1962. Four more sides are from “Charlie White of the Clovers” even though White had left the group in 1954. And then the last 4 sides are unrelated doo-wop songs “previously available on 45 only,” as described in the CD’s very brief liner notes.

Sorting out the history of The Clovers and Winley Records takes about as long as playing this CD. Better to let the music do the talking and spend some time surfing Google. The short version of the Clovers story: the band was formed in Washington DC in 1951 and was one of the earliest doo-wop groups. Their best-known hit is probably “Love Potion #9,” covered several times in the 60’s by rock groups, but they had other songs that placed high in the Billboard charts.

By the time they recorded for Winley Records (owned by the brother of long-time Clovers member Harold Winley), they had undergone many personnel changes and the doo-wop era was fading.  None of these tunes moved far on the charts or got much radio play.  But that doesn’t mean they are bad tunes. It’s a pity that “One More Time,” the B-side of “Stop Pretending” didn’t get heard by more 60’s rock bands, it’s ripe for a cover. Same goes for the A side of their second Winley single, “It’s All In the Game.”

The last four songs on the CD are two sides each by the New Souls and Early Knight & George Kelly.  They are nice entertaining rarities, but they don’t display chart-topping potential so one can understand why they faded into obscurity.

The transfers from 45RPM singles mostly sound quite good, with some records in rougher condition than others.  Winley Records stayed in business up into the hip hop era, and was the first label to record Afrika Bambaataa.  There is still a band called The Clovers, with a website and claiming regular bookings in the Washington, DC area.