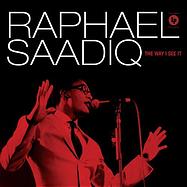 A new Black Star Line sails forth from Columbia records, and his name is Raphael Saadiq. The former Tony! Toni! Toné! member re-emerges on his appropriately named The Way I See It as the ultimate African American singer with a self-conscious sense of sonic history. His vintage swagger on the album cover gives a visual preview of a man who has done his homework on every major soul artist in America’s musical history. Most remarkably, despite his ability to conjure everyone from Wilson Pickett and Jackie Wilson to Earth, Wind & Fire and the Love Unlimited Orchestra, Raphael Saadiq still sounds like Raphael Saadiq.

It doesn’t hurt that he’s got a staff of string arrangers every bit as historically conscious as he is and a drummer who grooves like Stubblefield. Beyond his ability to balance influence and integrity, the production of this record provides ultimate added value. Every cut sounds calculated, like it came directly out of an old-school hit factory like Atlantic, Motown, or Phillies Records. Perfectly placed drum set lead-ins precede handclaps deep in the pocket of a serious groove, bluesy piano riffs punctuate bass lines straight out of the Temptations’ playbook, and the strings give well-placed intermittent swells over the subtle backdrop of tasty percussion tracks. With the exception of an ill-advised Jay-Z remix bonus track, the entire record flows like a compilation of soul hits from the ‘50s and ‘60s.

Obligatory rap-remix aside, the other guests on this record supplement Saadiq’s soul savvy in style. Joss Stone completes his Smokey Robinson and the Miracles act as they trade verses on “Just One Kiss.” CJ Hilton leads a disco verse into a catchy chorus on “Never Give You Up.” Just when you think this record can’t get any better, Saadiq pushes the second verse into a short but well-placed Stevie Wonder harmonica solo. He follows up with a final highlight—a slow, beautiful cut called “Sometimes.” Blending melodies and vocal influences from the Sam Cooke classics “You Send Me” and “A Change is Gonna Come,” he pays homage to the late great singer with lyrics that speak volumes about the African American experience.

In the wake of some fantastic British R&B imitators, Raphael Saadiq reminds the world that Soul with a capital “S” lives in Black America. Consistent with offerings from fellow Soulquarians, this record combines the spirit of Soul history with the best technology available to contemporary producers. The result is a record that tips the hat to his musical ancestors without sounding contrived. If any of the tunes on this disc do half as well in the charts as they ought to, it will remind the listening public that there’s a whole new generation of African American artists they’ll still be listening to in fifty years.