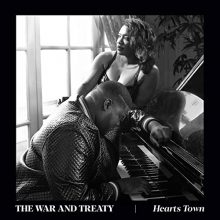 Named the 2019 Emerging Act of the Year by Americana Music Association, husband and wife duo Michael Trotter Jr. and Tanya Blount-Trotter are artists to watch out for as they continue to take the music world by storm. Between their performance at the 62nd Annual GRAMMY Awards back in January, the release of their newest album Hearts Town in August, and their spot as an opener on John Legend’s upcoming Bigger Love 2020 Tour (rescheduled for 2021), The War And Treaty have proven themselves to be a powerhouse R&B duo.

The couple, who met after sharing the stage at a music festival, had wildly different backgrounds leading into their current musical endeavor. Tanya, a talented vocalist from a young age, grew up pursuing music and acting while Michael captivated his fellow troops with his piano playing and powerful vocal presence while he was enlisted in the U.S. Army. Michael and Tanya have managed to bring their talents together to create music that is a dynamic blend of Southern soul, gospel, country, and blues. Singles from their newest album include “Take Me In,” a rousing gospel-tinged track calling for unity, and “Five More Minutes,” a redemptive and heartrending love story based on the couple themselves.

Hearts Town is an eagerly anticipated new release from The War And Treaty that offers a joyful musical experience that is full of heart and soul.