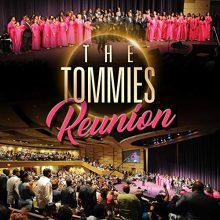 The Tommies Reunion has a rich history rooted in the fabric of gospel music.  The original Thompson Community Singers were formed in 1948 in Chicago by legendary gospel musician Rev. Milton Brunson. Named after Brunson’s pastor Rev. Eugene Thompson, they began recording for Vee-Jay records in 1963 at the same time that the Beatles released their first American LP on the historic black-owned label.  They later went on to record for HOB/Scepter Records and Nashboro/Creed Records before joining Word Records (Myrrh/Rejoice) in 1982. Throughout the decades, this ensemble under the direction of Brunson brought the world songs like “I’m Available to You,” “I’ve Tried Him and I Know Him,” “Safe in His Arms” and “I Really Love You Lord,” to name just a few.  After Brunson’s death in 1997, the choir continued to perform and record under the direction of his wife, Joanne Brunson, until 2000 with their Word Records release Real.

The Tommies Reunion formed a few years later under the direction of former members and acclaimed gospel musicians Darius Brooks, Percy Bady, Kim McFarland, Tina Watson Conley, Leanne Faine and Denise Battle in order to continue the rich legacy of the Brunson’s work. They recorded their first albums as Darius Brooks and The Tommies Reunion in 2008 titled Side A and Side B. The new self-titled The Tommies Reunion is their first on the Tyscot label. Featuring songs such as the hit single “He Worked It Out” and “Shout,” the album preserves both the historic sound of the gospel choir and legacy of the Brunson family through these new songs written and produced by Brooks, Bady, McFarland and the other founding members of The Tommies Reunion, including Brunson’s son, Kevin Brunson.