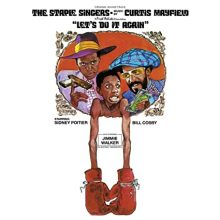 In the liner notes, Stax historian and author Rob Bowman relates how Curtis Mayfield managed to convince Pops Staples to sing the title track about “carnal love” while surrounded by his three daughters. Though the Staples had departed from their strict gospel roots to pioneer the secular soul folk sub-genre in the 1960s, Mayfield’s songs took them out of their comfort zone. First and foremost, Pops was “a church man,” but his three daughters were eager to hear their voices on the silver screen and managed to persuade their father to proceed with the sensual lyrics. Though no doubt surprising to today’s listeners, “Let’s Do It Again” with Mavis’ repeated tag, “do it, let’s do it again,” was pushing the boundaries of the airwaves at the time, but that didn’t keep the song from hitting the top of the charts.

This new edition from Omnivore also includes three bonus tracks: the single edits for “Let’s Do It Again,” “After Sex,” and another popular hit from the album, “New Orleans.” If you don’t already own these 1970s releases from the Staple Singers, Omnivore’s reissues—all featuring bonus tracks and liner notes by Bowman—are highly recommended.