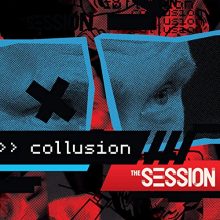 Straight outta New Orleans, The Session is a jazz quartet of young musicians who were schooled by several of the city’s legendary elders, such as Ellis Marsalis, Germaine Bazzle, and Dr. John. While their focus is on more contemporary aspects of jazz, they respect the genre’s historical traditions, with various members performing regularly at Preservation Hall and with Jason Marsalis’ Vibraphone Quartet. The group’s third album, Collusion, was released just before Donald Trump was impeached by the U.S. House of Representatives and, as the title confirms, is the group’s most political statement to date. Throughout the 10 tracks, quartet members Steve Lands (trumpet), Jasen Weaver (bass), Andrew McGowan (piano), and Darrian Douglas (drums) explore their “politically-fueled reflections on our country’s current climate,” while also expanding their own range as they each contribute original tunes for the album.

The disc opens with the evocative “Monk Dancing on a Levee,” a swinging tune by Lands that pits his trumpet against McGowan’s improvisatory keyboard licks. On “Terms of Surrender,” the group creates a film noir style “melody of mystery and intrigue,” while “Kelly Ann Con-Artist” is a hard bopping whirlwind of spin and “Five Fingers of Death” employs a driving 5/8 against 4 cross rhythm that showcases the band’s tight groove. Changing pace, the album closes with the soul-influenced “Kolmas Linja” that’s laden with sonic effects, and the “low-down, greasy” tune “This Blues,” which has Weaver and McGowan trading off solos between upright bass and piano before the rest of the group enters and drives it home.

Whichever side of the political spectrum you fall, The Session will have you grooving through the day with their spirited melodic and rhythmic interplay on Collusion.