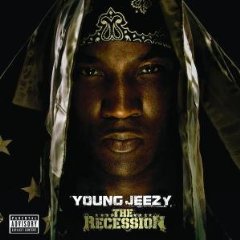 Possessing a distinctive voice is a double-edged sword: on the one hand, everyone recognizes it immediately, while on the other hand, there is no way to disguise its sound and whatever connotations are associated with that particular timbre. Young Jeezy has one of those voices, gritty, gravelly, and forceful, and therefore it is impossible for him to avoid sounding aggressive. It would be akin to James Earl Jones trying to sound timid and kittenish – not going to happen. As a result, Jeezy smartly avoids delivering many lyrics pertaining to love or sex, because to do so with such a voice would immediately sound predatory.

Thus, the bulk of The Recession, Young Jeezy’s third major album release, sticks to a lot of similar topics. In addition to the narrow group of subjects addressed in the lyrics, the instrumental backing of the tracks remains relatively static. Many of the tracks are formulaic, following a protocol which has worked for Jeezy in past efforts and continues to deliver in this album as well. It goes something like this: a slow introduction (sometimes with spoken words which foreshadow the upcoming lyrics), which the leads into a synth string or brass ostinato layered with a frenetic hi-hat pattern and topped with snarling lyrics from Jeezy. If you’re a fan of this pattern, you’re in luck, because “Welcome Back,” “By the Way,” “What They Want,” “Amazin’,” “Hustlaz Ambition,” “Who Dat,” “Don’t You Know,” “Word Play,” “Vacation,” “Don’t Do It,” “Put On” (feat. Kanye West), and “Get Allot” strictly adhere to the layout.

A few tracks deviate from this pattern and are a welcome respite from tracks that, at first, are difficult to distinguish from one another. “Circulate” (feat. Real Talk) features sweet interludes from Real Talk and brassy samples from Billy Paul’s 1975 track, “Let the Dollar Circulate.” “Everything” (feat. Anthony Hamilton and Lil Boosie) actually does follow the formula outlined above, but it is more soulful, thanks to Hamilton’s sung choruses (Hamilton was first introduced to audiences in Nappy Roots’ 2002 track “Po’ Folks”) and Lil Boosie’s distinctive tenor range in his guest verse. A curious pulsating, fluttering synth opening in “Takin’ it There” (feat. Trey Songz) and sounds more like Philip Glass or the Reading Rainbow theme than the intro to a hip-hop track, and Songz’s sung delivery in the chorus is very reminiscent of mid-1990s pop ballads. “My President” (feat. Nas) is underlain with an Americana-patriotic-esque theme. The guest vocals on the track are performed by Nas, which came as a surprise to many fans after Jeezy publicly doubted Nas’s skills. Nas’s rapid-fire verse on “My President” trounces any of Jeezy’s efforts in the same track, so listeners may read into that however they see fit.

Lyrically, most of the songs address various aspects of Jeezy’s hustler ambition, superiority over other rappers, dealings in drugs, and avoidance of the feds. Most lyrics with a political bent are observations or complaints aimed at the current administration, such as “I think Bush trying to punish us, sending little messages out to each and every one of us,” (from “Crazy World) or “Bush robbed all of us, does that make him a criminal? And then he cheated in Florida, does that make him a Seminole?” (from “My President”). While The Recession doesn’t tell listeners anything they didn’t already know, it’s still a strong, sharply engineered effort from Young Jeezy and his many collaborators. It delivers exactly what is expected, nothing more, nothing less.