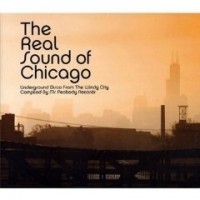 Title: The Real Sound of Chicago: Underground Disco from the Windy City

There is some irony in reviewing an album of disco from the Chicago area. This music, so often associated with New York, had its proverbial death in 1979 at Chicago’s Comiskey Park during a radio station’s “Disco Demolition” promotion. In spite of this event, The Real Sound of Chicago compilation is testament to the inability of a single act to destroy a cultural phenomenon; particularly one as pervasive as disco.

To create this album, Mike Grusane and Mike Cole, the owners of Mr. Peabody’s Records in Chicago, dug through their decades-old record collections to find the most representative, unique, and rare artifacts of Chicago’s dance music from 1976-1983. The result is a 23 track album that covers a wide territory from the funky to the soulful, to the gimmicky (“B.T. Boogie Terrestrial”) to the insightful (“School Days”). Following is the promotional video (courtesy of Mike Grusane):

For many, it may be initially difficult to understand what makes The Real Sound of Chicago different from the disco that emanated from other cities. Simply stated, the majority of the tracks on this compilation run a thin line between up-tempo R&B and the common disco sound of the period. A primary reason for this stems from the lack of major label backing, which helped develop the high-production East Coast sounds of the Salsoul Orchestra, The Village People, and K.C. & The Sunshine Band. Instead, the Chicago artists were often represented by small labels attempting to hop onto the disco bandwagon, resulting in a lack of strings and an emphasis on keyboard and percussion instruments. As a result, disco returns to its more soulful roots but with a funky twist, achieved by adding synthesizers to the mix for both the emulation of strings and organs.

All told, while the album succeeds in presenting the unique sound that draws strong lines between disco and Chicago house music, it falls short in certain respects. Firstly, the transfer quality of many of the tracks is, at times, poor. Particularly in the case of Carmen Amez’s “Never Gonna Fall In Love Again (Like I Fell In Love With You),” the high end of the track consistently distorts. While this is the case, it must be noted that the low budgets of these labels would result in the use of poor quality vinyl, which would produce albums that, with any extensive playing, would cause distortions of this type. In light of this, The Real Sound succeeds in presenting these tracks to a larger audience, who would have never heard them otherwise. Furthermore, it is also worth mentioning that The Moore Brothers’ “Bass Come Back” only existed in acetate form, making it a worthwhile gem in this set.

Secondly, a compilation of this sort demands extensive liner notes. Though I received this album as an MP3 download, I’ve discovered from other reviewers that the CD and LP versions also suffer from a lack of liner notes. While they are available on-line, I find this a poor substitute for readily available notes inserted in the packaging or as a file.

In spite of its sonic and packaging shortcomings, the tracks on The Real Sound of Chicago are generally excellent. As stated by the owners of Mr. Peabody’s Records, they have attempted to assemble a collection of above-average quality tracks that represent Chicago, and to that extent, they have succeeded. The tracks cover a wide range that will appeal to many tastes while still maintaining a cohesive sound and solid musical package. This compilation would best be suited for those who are curious about the gap between the “death” of disco and the birth of house, or those who simply want to hear some fun, uplifting disco tracks.