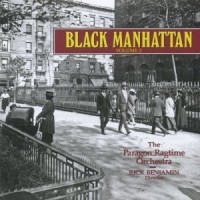 Rick Benjamin, the prolific founder/conductor of the Paragon Ragtime Orchestra, has once again reached into his massive library of historic American orchestra music and pulled out a handful of early 20th century gems by African American composers for volume 2 of Black Manhattan. The title derives from James Weldon Johnson’s 1930 history of New York’s black music and theatre communities from the 1890s to 1920s that called attention to “an amazing group of achievers . . .whose work profoundly transformed the cultural life of this nation.” Included among this group were members of the legendary Clef Club of New York―James Reese Europe, Will Marion Cook, Will Vodery, and the brothers James Weldon Johnson and J. Rosamund Johnson, among others, who were the focus of the first volume.  The new release offers a wider range of composers and styles, featuring works written for pioneering African-American theatrical companies including the Black Patti Troubadours, Williams & Walker, and The Smart Set, as well as productions from Harlem’s famed Lafayette Theatre.

Covering a span of twenty-five years from 1896-1921, the disc’s earliest work is “Black Patti Waltzes” composed by Will Accooe (1874-1904) in the standard 19th century Viennese style and dedicated to the celebrated soprano Sissieretta Jones, who at the time had just formed her musical comedy company. On the other end of the spectrum, two highlights of the disc date from 1921 and offer wonderfully contrasting styles: W.C. Handy’s “Aunt Hagar’s Children Blues,” sung to great effect by Linda Thompson Williams in the style of the great female blues belters of the 1920s; and the overture to Eubie Blake’s Shuffle Along, the first successful African American musical, in an arrangement by Will H. Vodery that masterfully references hit songs from the production including “I’m Just Wild About Harry.” In between are many delightful examples of ragtime, ballads, one-steps, and even a Brazilian-themed tango by Will H. Dixon, who Benjamin considers to be a long-lost genius who wrote “some of the most hauntingly beautiful music” on this CD.

Of the 19 tracks, only a few were recorded during their heyday. “Nobody,” a major hit song from the 1906 show Abyssinia with music by Bert Williams and Will Marion Cook, was first recorded by white “coon” singer Arthur Collins (Edison 9084) and shortly thereafter by Williams for Columbia (cylinder 33011). Baritone Edward Pleasant covers the song on Black Manhattan and does a marvelous job bringing it back to life, no doubt drawing upon Williams’s recording for inspiration. “The Castle Walk,” a syncopated one-step composed by James Reese Europe and Ford T. Dabney for Vernon and Irene Castle at the peak of the social dance craze, was recorded by Jim Europe’s Society Orchestra in 1914 (Victor 17553).  “Aunt Hagar’s Children Blues” and Wilbur C. Sweatman’s “That’s Got ’Em — Rag” were likewise recorded during the 78-rpm era and it’s interesting to compare all of these to the high fidelity contemporary renditions.* But most of us will be hearing the other works on Black Manhattan Vol. 2 for the very first time.

As with his recording of Scott Joplin’s Treemonisha (2011), Benjamin strives to achieve an accurate restoration of this music as opposed to a reconstruction. Hence the musicians of the Paragon Ragtime Orchestra perform on period instruments and the vocalists take care to follow the performance practices indicative of early 20th century music theater (soprano Anita Johnson and tenor Robert Mack are also featured soloists).  Add an authoritative 48-page booklet that sheds new light on many of these African American composers (also including Frederick M. Bryan, J. Leubrie Hill, Al. Johns, Chris Smith, Scott Joplin, J. Tim Brymn and James J. Vaughan), and you have a truly spectacular package that performs a great service to the advancement of the study of American music.

*Notes on the recordings were taken from Lost Sounds: Blacks and the Birth of the Recording Industry, 1890-1919 by Tim Brooks (University of Illinois Press, 2005) and the University of California, Santa Barbara’s Cylinder Preservation and Digitization Project website.