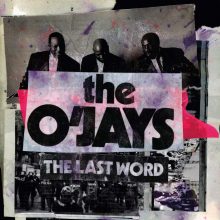 The O’Jays are back with their new project, The Last Word, and it’s like they never left.  Fans once again can experience the classic Philadelphia soul sound of Eddie Levert Sr., Walter Williams Sr. and Eric Nolan Grant (who joined the group in 1995), whose smooth, rich harmonies are backed by elaborate arrangements and lush strings. The new release is the O’Jays’ first studio album in 15 years and regrettably is said to be their final album. Grammy nominated producers Steve Greenberg, Mike Mangini and R&B legend Betty Wright assisted with the production.

The O’Jays, who have been performing for over five decades, released their first chart topping album, Back Stabbers, in 1972 for Philadelphia International Records. Their string of worldwide hits includes the songs “Love Train,” “For the Love of Money,” and “Forever Mine.” In 2005, the group was inducted into the Rock and Roll Hall of Fame for releasing some of the greatest soul music of the ‘70s and ‘80s.

One of the first singles from the new album, “Stand Up (Show Love),” reprises themes from some of the group’s classic message songs, with lyrics such as “Money makes the world go ‘round / money brings the morals down, don’t it!”

Songs like “Above the Law” and “Start Stoppin” are also proof that the O’Jays still have much more to say. “Above the Law” is an expression of their concern for the current state of Black life in America, stating, “Black boy on drugs imprisonment and a heavy fine / White boy on drugs, rehab and treatment to restore the mind.” They call to attention the ways that racism remains flagrant in both the social and political sector of the U.S. and to the idea that “slavery” has not been relinquished but has evolved. “The Law” is the issue because it creates and supports a system that overtly and covertly oppresses Black people. “Start Stoppin” on the other hand, is a song of hope that encourages people “to not give up and lose control.” The O’Jays encourage people to keep fighting back!

While this album may be “The Last Word” from the O’Jays, it will certainly leave a mark in the hearts of both fans and first time listeners.