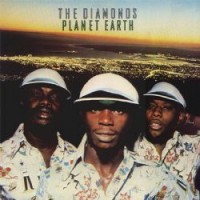 There are few groups that have been together for as long as The Mighty Diamonds. Formed in 1969 in the Trenchtown area of Kingston, Jamaica, the group has played to countless audiences over the world throughout their 40+ years of performing. The amount of material they have released over the years is just as impressive, practically equal in number to the years they’ve been together. But with such an extensive catalogue, the albums will eventually be lost to time if no reissues are forthcoming. But leave it to the minds over at Hot Milk, who have given the proper treatment to two rare Mighty Diamonds releases that have finally been put onto CD. Coming off last year’s release of Keith Hudson’s Torch of Freedom, Hot Milk’s latest project is a double album release of the vocally smooth and instrumentally sound Planet Earth and its dub accompaniment Planet Mars Dub.

Hot Milk has opted for the intertwined version of both albums, with the dub version following immediately after the original reggae version. It’s refreshing to listen to this method, since hearing the reggae version seamlessly flow into the instrumental dub version leaves an appreciation of not only the vocal talents of the Mighty Diamonds trio, but also the instrumental virtuosity of the Icebreakers. Dub versions echo the same laid-back style of the Mighty Diamonds, though with a more barebones approach to the reworking of the songs using reverb, echo, and delay as the main driving forces for each mix. And suffice to say, this preference was a great choice as it allows the album to flow from song to song at a perfect pace. But not enough can be said of the Mighty Diamonds, whose vocals throughout both albums show them at the height of their career in the late 1970s. “Let The Answer” is indicative of the whole album: tight vocalization, beautiful lyrics, and strong musical accompaniment.

The remastering work of Hot Milk is absolutely flawless, giving nothing but love and devotion to a release that had unexpectedly been lost for so long. Additionally, liner notes provided by reggae expert John Masouri give a concise overview of the long and brilliant history of The Mighty Diamonds, and an in-depth look at the album itself. Hot Milk continues to release great material, and this reviewer waits for whatever grand ideas Hot Milk has in store for us for the rest of this year.