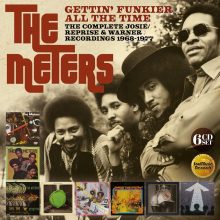 Taking us on this deep dive into the Meter’s catalog is Charles Waring, jazz writer for Mojo and Record Collector, who penned the liner notes for the accompanying 40 page booklet. Every detail is covered, including data on sources, release dates, songwriters, and producers for each of the 116 tracks. Rather than reproducing the original albums, each disc in this set has its own title and track order. Disc 1, “Here Comes the Meter Man,” and Disc 2, “A Message From the Meters,” cover the first three albums released by Josie Records from 1968-1971 and produced by Allen Toussaint and Marshall E. Sehorn. This period yielded the early hits such as “Sophisticated Sissy” featuring Art’s sanctified organ chords and “Cissy Strut” with George’s bass doubling the melody in sync with Leo’s guitar, which came to be a key feature of the Meters’ music. Another notable aspect of these albums is the original material, with only a few covers filling out the tracks. The Meters’ songs during this era were short but punchy, the instruments locked into the groove but with intricate detail.  Some songs were a bit more pop or jazz oriented, but nearly all were funk-driven. Many of the funk gems on their second album would later be sampled by the likes of Tupac, Ice Cube, Gang Starr and MC Lyte. By the third album, Struttin’, Art’s vocals were coming to the forefront. Songs like “Hand Clapping Song” and “Funky Meters Soul” are great examples of this period amidst the more laidback instrumentals.

Discs 3-6 cover the Reprise and Warner Brothers years, stretching from 1972 through the peak of the disco era in 1977. After the Josie Records went under, The Meters were signed to Reprise, a label with little experience marketing black musicians. As a result, the Reprise albums fell short of anticipated sales, but they are full of songs that stand the test of time. Cabbage Alley (1972) has more of a soul-jazz groove, especially on instrumentals such as “The Flower Song” and “Smiling.” But the shift in The Meters’ sound is even more apparent on songs like “Stay Away,” a fantastic example of funk-based rock grooves with fuzzy psychedelic overtones. Their sound matured even more on Rejuvenation (1974), which added horns arranged by the great Wardell Quezergue and a line of background vocalists to songs such as “Jungle Man,” “Africa,” and the extended funk-rock fusion jam “It Ain’t No Use.”  Fire on the Bayou (1975) known for its incendiary title track, continued the funk-rock exploration, and this set offers five outtakes including a cover of Hank Williams’ “Jambalaya” and the slow-grinding, percussion-heavy “He Bite Me.” Trick Bag (1976) moves into disco territory and is definitely a mixed bag, while New Directions (1977), produced in San Francisco, ranges from the slap-bass heavy “Funkify Your Life” to the reggae cover “Stop That Train” to the sweet soul of “Be My Lady.”

Though the original group disbanded over forty years ago, The Meters’ legend lives on through the younger generations of NOLA musicians they influenced, the multitude of hip hop artists who sampled their work, and of course the various Meters-related groups who still carry on the funk tradition (sadly without Art Neville, who died in 2019). Gettin’ Funkier All The Time is a meticulously produced set and the title says it all—the grooves are locked, loaded and ready to roll.