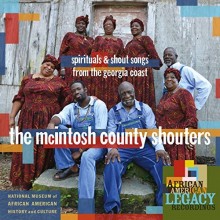 This album is the second collection of The McIntosh County Shouters recorded and produced by Smithsonian Folkways. The first, The McIntosh County Shouters: Slave Shout Songs from the Coast of Georgia was released in 1983. The Shouters belong to a third generation of people freed from slavery and their featured songs on this album are performed exclusively for the traditional ring shout. In 1993, the group received the National Endowment for the Arts National Heritage Fellowship, which is considered to be the greatest honor for the traditional arts in the United States.

As part of the educational mission of Smithsonian Folkways Recordings, each album on the record label includes comprehensive liner notes that are ideal for further research. The liner notes on this album include photographs, detailed biographies of the artists, interviews with current members, and historical and cultural contextualization of the traditional ring shout. Bolden, aka “Briar Patch,” on the coastal mainland of Georgia is the home of The McIntosh County Shouters. The Mount Calvary Baptist Church is the spiritual space of the Gullah/Geechee people, known as “the stopping place of the shout.”

It is satisfying to hold such a project in your hands, with 17 tracks and a 40-page booklet accompanying the physical CD. Each song incorporates the essential elements of the ring shout: the rhythmic hand-clapping, a stick beating the floor, the soul-filled spirituals, and the fusion of call-and–response singing. All that is missing on this album, as described in the liner notes, is the visual element—the ability to watch the shouters shuffling in a counterclockwise circle. To amend this problem, Smithsonian Folkways created an accompanying short documentary film that shows the Shouters singing and dancing together. Brenton Jordan, the youngest Shouter today, looks forward to the future of the tradition and believes the strength of the shout community will continue to thrive.