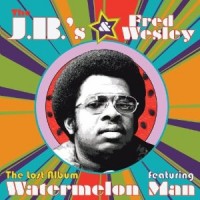 This album is a fun soul-instrumental romp through the music of the early ‘70s as expressed by the jazzy side of trombonist Fred Wesley. It is also commercial proof of the sometimes tortured relationship between Wesley and his boss, James Brown. After producing and funding the recording and mixing of this album, Brown decided not to release it, telling his mixing engineer and production chief Bob Both, “we’re going in a different direction” (according to the liner notes by Alan Leeds).

The Godfather of Soul might have had real musical issues with parts of this album; the liner notes say he attended only one of the recording sessions. Jazz was the first love of Wesley, who hails from Mobile, Alabama. Going into the sessions for this album, Wesley was clear that he wanted to make a jazz album, as Brown had done in the early ‘60s. Rather than work Brown’s road band, many of the sessions were cut with crack New York studio musicians. Wesley admitted being tentative, writing in his autobiography, “I started completely ignorant of how to conduct a recording session.”

So the end result is an album sometimes far afield of what James Brown and his working band were doing in the early 1970s. Wesley’s album includes jazz-arranged covers of Carole King’s “You’ve Got a Friend,” and the soft-soul “Everybody Plays The Fool” originally by The Main Ingredient. Gilbert O’Sullivan’s soft-rock “Alone Again (Naturally)” was covered as a single B-side. And there is straight jazz, like Wesley’s own “Sweet Loneliness” and the standard “Secret Love.” Amid these departures from the James Brown sound are solid funk cuts like the band’s version of “Watermelon Man” (recording overseen and drums played by James Brown), “Transmograpification” by session arranger Dave Matthews, and Brown’s “Get On the Good Foot.” This reissue CD also includes four singles B-sides. In all, half of the 12 tracks on the CD have not been previously released, and this is the first time that the first 9 tracks are released in original sequence.

What holds this album together, and makes it worth hearing, is the playing. Fred Wesley is an extraordinary trombone player, the best in the funk music business but also solidly rooted in jazz and thus able to lead a band and solo through the non-soul tunes. The NYC studio aces include Randy and Michael Brecker and Joe Farrell on saxes; no other musicians are mentioned by name or listed in the booklet notes. The recording and mixing, as well as the CD remastering, are crisp and clear-sounding, the better to hear everyone’s solid intonation and excellent ensemble work. Alan Leeds’ liner notes are concise and set the album in context.

Despite the sometimes-dated set list, this album is fun and, since Fred Wesley is still alive and actively performing, it’s nice for his jazz project see the light of day in the format he envisioned.