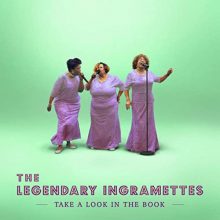 Now known as The Legendary Ingramettes, the group’s new release, Take A Look in the Book, is their first effort with Almeta Ingram-Miller singing lead following her mother’s passing. The album showcases songs from Appalachian sources like Ola Belle Reed, as well as reworked family favorites, some of which date back to old spirituals. Recorded over just three days in Richmond, producer and state folklorist Jon Lohman says that “most of the songs were cut in one take to keep the power of the group’s incendiary live performances.” Lohman wanted to capture the live essence of the Ingramettes’ shows, so there was no editing of the instruments in post- production. The sound has a raw, rural gospel feeling which is both suspenseful and exhilarating, drawing one into the testimonies and the lyrics. It is truly church the old time way.

“Take a Look in the Book” is a song that urges listeners toward their Bible to find the answers to life and its problems, especially during these troubling times. The groups’ cover of Bill Wither’s “Grandma’s Hands” features a new final verse that speaks of Almeta’s own grandmother from rural Georgia and “how she picked cotton until her hands bled.” This tribute to her grandmother speaks of what life what was like living in a family of sharecroppers in the rural South. In a live version of the song she testifies, “what we went through made us grateful,” reminiscing on a time when they made it through the winter eating butter beans without running water or a toilet in their home. Almeta’s arrangement of the blue grass standard, “I’ve Endured” by Ola Belle Reed, is another song that connects the group back to their childhood and the challenges they faced as a black family in the South during the 1900s. The idea to place this song on the album, according to Almeta, was birthed after hearing a bluegrass group known as the White Top Mountain Band perform it during a festival. Almeta says, “What got to me was the lyrics of the song… I said, my God. That song just stayed with me!”

The Ingramettes continue to thrive and uphold the sound and the standards that Maggie Ingram built. Take A Look in the Book is not only for gospel music fans, but for anyone who appreciates hearing about the historical livelihood of black people in the Jim Crow and post-slavery South. The Ingramettes not only speak to the reality concerning Black life and where it has been, but also shed light on how far Black folk have come.