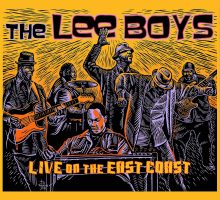 Over the past decade, a number of “sacred steel” bands have left the confines of the church to take center stage on the festival circuit. The Lee Boys of Miami, Florida, have emerged as a crowd favorite, as demonstrated by their new release, Live on the East Coast. Recorded in 2018 at three different venues, the album includes live performances of previously released songs as well as a few gems making their first appearance on record.

The Lee Boys represent the third and fourth generations of sacred steel musicians to emerge from the Perrine, Florida, Keith Dominion Church of the Living God—one of the branches of African American Holiness-Pentecostal churches that feature pedal and lap steel guitars as the dominant instrument in worship services. Brothers Alvin Lee (electric guitar), Derrick Lee (vocals) and Keith Lee (vocals), all learned to play instruments at a young age and performed in the church led by their father, steel guitarist Elder Robert Lee. Their mother’s uncle was Bishop Lorenzo Harrison, a legendary pioneer of the sacred steel tradition in the Jewel Dominion, who passed his knowledge of the instrument (and wah pedal) to Elder Lee and other family members. When the Lee brothers decided to form a band, they recruited their nephews Alvin Cordy Jr. (six-string bass), Earl “Big Easy” Walker (drums), and Roosevelt Collier (pedal steel).  For the live concerts on this recording, young newcomer Chris Johnson is featured on pedal steel guitar instead of Collier, who recently embarked on a solo career. Here’s a taste of the band from a recent performance with Johnson at the Springing the Blues Festival:

Live on the East Coast features some fantastic adaptations of traditional gospel songs, including the opening tracks “In the Morning” and “Walk with Me Lord,” which serve as an introduction to the Lee Boys funk, rock and blues infused style. “Don’t Let the Devil Ride,” popularized by Brother Joe May in 1968, is transformed into an uptempo blues song with a steady groove. Though the vocals may lack the fiery conviction of Brother May, Johnson’s pedal steel solo is just as incendiary. The Lee Boys take on several more classics:  the Staple Singers hit song “I’ll Take You There,” James Cleveland’s “Lord Help Me to Hold Out” and Bobby Blue Bland’s frequently covered R&B classic, “Turn on Your Love Light.” Two original tracks from the group’s 2012 album, Testify, are featured in updated renditions: the contemporary praise song “Praise You” and the title track “Testify” that takes the crowd straight to church. On “Come on Help Me Lift Him,” Johnson proves he is ready to step into Collier’s shoes with his lightning speed riffs and solos.

The album closes with two tracks from the Lee Boys’ 2005 album, Say Yes!  The more contemplative original song “Walk With Me” encourages listener’s to seek guidance from the Lord during troubled times, while “You Got to Move” is straight out of a Pentecostal “shout” session, with driving rhythms encouraging the audience to express their praise through dance. Blues harpist Isaac Corbitt joins in on this track, adding to the call and response between vocalists, while Johnson contributes another blazing solo.

To the casual listener, Live on the East Coast might sound like a blues rock jam session, but the Lee Boys are preaching the gospel while carrying on the sacred steel tradition of their elders. The album is an excellent encapsulation of the group’s repertoire, from R&B and gospel classics to original songs.