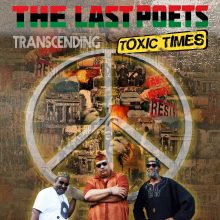 The Last Poets are at it again with their latest album, Transcending Toxic Times. Released just a year after their 50th anniversary album, Understand What Black Is (2018), and a few months after Understanding What Dub Is (2019), this funk oriented album is fused with elements of jazz, R&B, rock and percussive rhythmic grooves. As with previous efforts, there are also socio-cultural messages that comment on the conditions of African American lived experiences. The album brings together the original members—Baba Donn Babatunde, Abiodun Oyewole and Umar Bin Hassanall—along with producer and bass guitarist Jamaaladeen Tacuma, for what is likely the “definitive Last Poets album.”

According to band members, Transcending Toxic Times is “not poetry set to music, nor is it music made for poets. This is a seamless transfiguration of the groove, the words, and the essential human elements that live between the notes and the words.” Moreover, the album is “a broad work of human emotion: anger, scorn, frustration, challenge, beauty, sorrow, love, and joy are all present.” Songs like “For the Millions” reminds us about the historical plight and oppression enslaved Africans experienced. This poem advocates for social change by coming together, acknowledging the “beauty of ourselves…as divine creations…reclaiming our throne…and leaving the American nightmare alone.” The message of uplifting Black people continues on “If We Only Knew What We Can Do,” pointing out that “we have the juice” and that only by taking control of our lives will we be able to “live with dignity.”

The title track “Toxic Times” is a politically charged poem, where Oyewole calls attention to the current political climate in the United States, issues of police brutality against people of color, the consequences of climate change, and gender inequality. To these issues, Hassan points out that we must “learn to be humane, use power and not become vain,” and ultimately, “understand what love is…and make it a fact!”

This album could not come at a better time—its socially conscious lyrics and message of love, peace, and unity is exactly what we need to rise above the noise and conflict. Transcending Topic Times is a music masterpiece that elevates the body, mind, and soul.