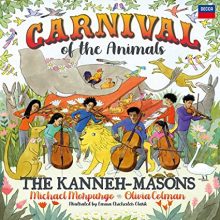 London’s “young, gifted and classical” Kanneh-Mason family have joined together with friends for a retelling of Camille Saint-Saëns classic children’s suite, Carnival of the Animals, paired with Michael Morpurgo’s Grandpa Christmas. Performers include the four oldest family members who currently study at the Royal Academy of Music—pianist Isata, cellist Sheku, and violinists Braimah and Konya—with their younger siblings including 18-year-old pianist Jeneba, 15-year-old violinist Aminata, and 11-year-old cellist Mariatu. Recorded at the legendary Abbey Road Studios, this album marks the first release to feature all seven of the famous siblings performing together.

Many are likely familiar with performances of Carnival of the Animals that feature the humorous verses penned by Ogden Nash, which served as an entrée to classical music for older generations. For this project, British author Michael Morpurgo, who holds the title of Children’s Laureate for his many children’s books, was invited to write a new set of clever verses. Morpurgo also serves as narrator for many of the tracks, but the septuagenarian’s reading is not as lively as one might wish, though the alternating tracks narrated by Oscar-winning actress Olivia Colman are skillfully done. The Kanneh-Masons’ perform with youthful enthusiasm and the suite offers the perfect opportunity to highlight different members of the family. But in my opinion, this pairing of the narrators with the young musicians falls somewhat flat. I assume the producer wanted to appeal to all age groups, both young and old—something grandparents can enjoy with their grandchildren over the holidays—which is certainly a worthy objective. But I can’t help but think he missed a golden opportunity to engage a new generation of listeners with something strikingly new and contemporary.

The second half of the disc features Morpurgo’s original story, Grandpa Christmas, a more up-to-date tale that touches upon about environment issues. Once again narrated by the author, with Mariatu Kanneh-Mason reading the part of the granddaughter, the work was set to music for this project, primarily drawing from classical chestnuts. On alternating tracks with the narration, the Kanneh-Mason’s showcase their talent on “Flight of the Bumble Bee” and “Dance of the Sugar Plum Fairy” from The Nutcracker, in addition to short works by Bartok, Grieg, and contemporary composer Eric Whitacre.

The disc concludes with the Kanneh-Mason’s performing an arrangement of Bob Marley’s “Redemption Song” in celebration of its 40th anniversary. If you’re looking for a special gift, the deluxe edition includes a children’s book with the CD, featuring original illustrations of Carnival of the Animals by Emma Chichester Clark.