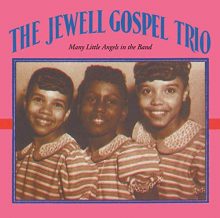 Before Candi Staton hit it big as a soul singer in the 1970s, she was a member of an extremely talented group of young singers known variously as the Jewell Gospel Trio, Jewel Gospel-Aires, and Jewel Gospel Singers. Based in Nashville, the core group included Canzetta Staton*, as she was then known, her sister Maggie Staton, and the late Naomi Harrison. This new compilation, The Jewell Gospel Trio: Many Little Angels in the Band, tells the story of the group as well as the Staton sisters through the liner notes by Opal Louis Nations and archival photos supplied by Maggie.

Of particular significance is the trio’s affiliation with the Jewell Domain of the Church of the Living God, one of the branches of African American Holiness-Pentecostal churches that pioneered the ‘sacred steel’ tradition, featuring pedal and lap steel guitars as the dominant instrument in worship services. In fact, Naomi was the daughter of the great Lorenzo Harrison, who played pedal steel guitar on the group’s first recording sessions. The girls were trained at the Jewell Academy and Seminary in Nashville, where they were under the strict control of the imposing Bishop Mattie Lou Jewell, the great grandmother of Naomi. Lorenzo’s wife, Nettie Mae Harrison, who had a more “worldly” knowledge of R&B music, became the girls’ music instructor. Since many local churches lacked an appreciation for the Pentecostal style of worship music, the trio often performed in secular venues in Nashville, including Ryman Auditorium, where they packed the house. As their fame grew, the “three little angels” were invited to record, which is where this compilation begins.

In 1953, the group traveled to Los Angeles where they recorded two sides for Aladdin Records, with Maggie singing lead on the ballad “Rest, Rest, Rest” and Nettie Mae taking over on the blues-inflected “At the Cross.” A hallmark of this early recording is the use of a rhythm section featuring Nettie Mae on piano, Lorenzo on pedal steel and bass guitar, Harvey “Deacon” Jones on guitar, and Corneva Burns on drums. The set (which is not chronological) opens with three tracks recorded during a 1955 Nashville session for Excello featuring the trio augmented with Sederia Boles and Shirley Ann Boyd, who share the lead. Changes in the rhythm section included Rolma Jones on piano and Lorenzo on bass—he would participate on one more recording session with the trio, but regrettably not on steel guitar. These 1955 tracks include the uptempo “After Awhile With Jesus” as well as two of the group’s originals, “Oh Lord, Guide Me” and their signature song, “Many Little Angels in the Band,” the latter released by Nashboro. Sederia also leads Thomas A. Dorsey’s “Take My Hand, Precious Lord” and a rousing version of the group’s biggest hit of 1956, “I Looked Down the Line and I Wondered.”

In 1956, after Canzetta turned sixteen, her powerful voice could no longer be contained within the background harmonies. Over the next two years she sang lead on the majority of the tracks and it is exciting to experience her maturity on “Jesus is Listening,” “Too Late,” and the amazing slow burner “Sin is to Blame,” as well as her duets with Naomi on “The Gospel Ship” and their final 1958 recording, “It’s All Over Me.” Like the young Aretha Franklin, two years her junior (they performed on the same gospel circuit), Candi’s gifts were recognized at an early age and cultivated through the church. After establishing herself as a soul singer and disco diva, she returned to her gospel roots, releasing many more albums on her own label, Beracah Records.

By 1958, the Jewell Gospel Trio had shared the stage with all of the top gospel artists of the era, including the Soul Stirrers, Swan Silvertones, Mahalia Jackson, the Davis Sisters, the Staple Singers, and the Caravans, to name a few. After a spectacular five year run the girls left the group for other pursuits, but listeners can fully appreciate the glory of this groundbreaking gospel girl group on The Jewell Gospel Trio: Many Little Angels in the Band.

The set concludes with additional songs recorded in 1968 and 1971 by Shirley, under her married name Shirley Lee—the self-produced track, “This is the Real Thing,” and three songs that were not included in Numero Group’s 2012 release, Songs of Light, which featured Lee’s recordings for the Revival label. These four tracks are a most welcome addition and a fine way to fill the remaining space on the compilation.

*The liner notes incorrectly use Canzietta as Candi’s given name. Follow this link to an interview with The Guardian’s Paul Morley, where Candi talks about her stage name, her early R&B records and her transition into a disco diva (2011).