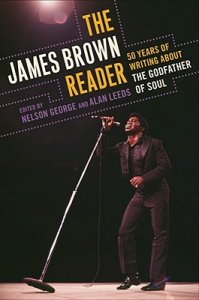 “In the middle of the twentieth century, Brown was a member of a historic generation of entertainers who pushed the boundaries of American song, dabbling in gospel, blues, jazz, country, and the emerging sound of rock and roll. From barrelhouses and tent shows, from bars and churches, a new attitude toward performance was concocted, just as the civil rights movement was stepping onto the national stage. Brown would become one of the many to embrace “soul” as a style, making secular salvation his stock in trade. Along with impassioned vocalizing, he developed a flamboyant onstage persona-part street dancer, part boxer, part preacher-that would redefine showmanship for his generation, and which resonates to this day.” – Nelson George, excerpted from the preface to The James Brown Reader.

The James Brown Reader: 50 Years of Writing About the Godfather of Soul is a “must have” for all JB fans (which should be just about everyone on the planet). Nelson George (author of The Death of Rhythm and Blues, Post Soul Nation, and Hip Hop America) and Alan Leeds (JB’s former tour manager) have compiled over four decades of articles about the Godfather of Soul into one concise volume, supplemented by photos from Leed’s personal collection as well as a Time Line (p. xiii-xxxii) and Discography (p. 303-313), both annotated by Leeds.

The content is organized chronologically and divided into five chapters by decade, beginning in the 1960s. Articles are drawn from a variety of sources including newspapers (Chicago Daily Defender, New York Times, Philadelphia Inquirer, etc.) and periodicals (Rolling Stone, Variety, Rock, Soul, Goldmine, Village Voice, Downbeat, etc.), along with an occasional excerpt from liner notes. The African American view is interjected by various writers ranging from Nelson George to Chuck D, Vernon Gibbs, and journalists from the Chicago Daily Defender. Given the plethora of press coverage surrounding the life of James Brown, the task of selecting articles must have been extremely daunting, but Leeds and George have done an exemplary job.

What is most notable about this compilation is the care taken to select writings that position Brown’s career within the greater sociopolitical context of each era. George alludes to this agenda in the opening paragraph of his preface:

“It was the Jim Crow time, the early decades of the twentieth century, when stifled dreams, cruel barriers, and institutional racism were the American way. Brown was just another dirt-poor Negro boy dancing for money in a redneck town, yet somehow cultivated strong self-esteem within a system devised to quell just such a quality. Not surprisingly, young Brown bumped up against the barricades of whiteness, entering the penal system, an enduring destination for self-satisfied black males who didn’t know their place.”

Not surprisingly, the articles that follow delve not only into the life and music of JB, but also racism, segregation, the Civil Rights Movement, drugs, the black experience in the music industry, and the gradual awareness and acceptance of black music by white America. For example, here is an excerpt from a wonderful piece by Albert Goldman titled “Does He Teach Us the Meaning of ‘Black is Beautiful’?” (New York Times, June 9, 1968):

“Talk about your Black Power. Take a look at James Brown, Mister. That’s right, James Brown, America’s Number One Soul Brother. To whites, James is still an off-beat grunt, a scream at the end of the dial. To blacks, he’s boss-the one man in America who can stop a race riot in its tracks and send the people home to watch television. Twice he worked that miracle in the terrible days following the murder of the Rev. Dr. Martin Luther King Jr.”

Then there is the poignant article “Pleas, Pleas, Pleas: The Tribulations and Trials of James Brown” (Village Voice, Feb. 21, 1989) by Ivan Solotaroff, who tries (unsuccessfully) to interview Brown in prison following his three year sentence on drug charges and aggravated assault (outdoing OJ, Brown led officers on a two-state, 80 mph car chase from his hometown of Augusta, Georgia to Aiken, South Carolina). Here all of the details of Brown’s legal problems as well as his drug addiction are laid bare. But as Solotaroff notes, the odds were heavily stacked against Brown from the beginning, and that he was able to (mostly) transcend these odds and change the whole course of popular music was downright miraculous:

“Among the handful of performers who arose unfiltered out of what was openly called ‘race music’, Brown was one of the few to escape death on the road, death by drugs, death in prison, the living death of golden-oldie status, or the retreat into the obscure immortality of gospel. Twenty years before rappers appropriated him, 10 before disco digitalized him, Brown anticipated the future of black music by stripping his sound to pure rhythm, blueprinting Pan-African pop, a worldwide explosion against which the Beatles and Stones are a circumscribed, Anglo phenomena. At 53, James Brown, the man who taught us all how to dance, was rocking the pop charts (“Living in American, No. 4), and last year only Sade’s “Paradise” stopped Brown from topping the R&B charts for the 18th time.”

The book concludes with two articles published posthumously. In “Perry Man Remembers Visit to Graceland After Death of Elvis” by Woody Marshall (The Macon Telegraph, Aug. 16, 2007), Brown’s business manager, Perry Davis, tells the story of Brown’s frantic efforts to charter a plane to Memphis the day after Elvis died in order to pay his respects to the singer and his family. At Graceland, where Elvis is lying in state, an overwrought Brown encourages Perry to follow his example and touch the body to “bring closure.” Perry draws upon this experience following the death of Brown. The closing article, “James Brown and His First Family of Soul” (Waxpoetics, Feb/March 2007), offers recollections by Alan Leeds, who ponders “just how different the world would have been were it not for James Brown.”

Co-editors Nelson George and Alan Leeds, along with Vernon Gibbs, discuss the book, James Brown’s upbringing, and his influence on the world of music in this video:

The James Brown Reader is really a more of a collection of provocative and extremely riveting short stories, perfect for the beach or those short subway rides to work. But I’m telling you straight up–you won’t be able to put this book down once you get to the office.