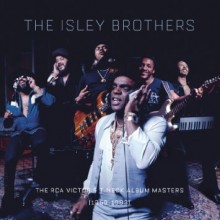 How many artists rate a 23 disc box set? In the case of the Isley Brothers, 23 are more than warranted, especially when most are filled out with rare and unreleased tracks from the Brothers’ prime years.

The original trio of O’Kelly, Rudolph and Ronald Isley scored their first hit with the original version of “Shout!” on RCA-Victor in 1959, but left the label in 1960 after one album and a few singles, all included on the first disc. The fits, starts and frustrations of their subsequent work for Wand and Motown—which produced “Twist and Shout” and “This Old Heart of Mine” but no other major hits—are not part of this set, which jumps to the spring of 1969 on the second disc. Nevertheless, there are a few tantalizing performances issued as singles by other labels in the 1964-65 period when young Jimi Hendrix was the Isleys’ guitarist.

The leap to 1969 makes for a dramatic and jarring transition, and it marks the beginning of one the greatest runs of creativity and success in pop, rock or rhythm & blues. “It’s Our Thing” was the first album released by the Isleys on their T-Neck label, named for their adopted home of Teaneck, New Jersey. The album and hit single “It’s Your Thing,” served notice that the Isleys’ blend of soul, funk and rock would be competing head to head with dominant artists like James Brown and Sly and the Family Stone.

Discs 3, 4 & 5 chronicle an exhilarating period of barely a year in which the Isleys release three albums: “The Brothers: Isley,” the all-star double album “Live at Yankee Stadium” and ”Get Into Something.” The familiar six man line-up of the 1970s and early 1980s crystallized in this period, as younger brothers Ernie, Marvin and brother-in-law Chris Jasper formed the nucleus of the original trio’s backing band.

In 1971, the Isleys released “Givin’ It Up,” a collection of covers by songwriters ranging from Bob Dylan to Bill Withers. The opening track fused Neil Young’s song of the Kent State massacre “Ohio” with Jimi Hendrix’s “Machine Gun” to create a harrowing nine searing and apocalyptic minutes led by Ernie Isley’s scorching guitar lines and feedback. Throughout the decade, the Isleys would remake and rethink many unlikely songs, including Seals and Crofts’ “Summer Breeze” and Todd Rundgren’s “Hello It’s Me.”

The Isleys went from triumph to triumph for the rest of the decade, all ably presented here. An unreleased album of hits recorded live in the studio in 1980 is one of the later highlights of the set, as the Isleys moved into a period in which they were strongly affected by the “Quiet Storm” trend in rhythm & blues, though always with a distinctive Isley’s touch, such as the sizzling guitar lines that animate “Choosy Lover” from the last album in the set, 1983’s heavily sampled Between the Sheets.

Sensitive notes by Lynell George and A. Scott Galloway round out the package and superior mastering of a broad range of analog sources by Mark Wilder does the music proud. Big as it is, this set has been priced to move, and is unlikely to suffer the doorstop fate of many overly ambitious box sets.