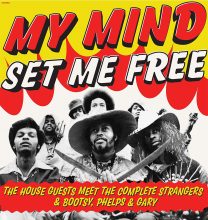 The new compilation from Cincinnati’s Shake It Records, My Mind Set Me Free: The House Guests Meet the Complete Strangers & Bootsy, Phelps & Gary, features nine tracks from a collective of rhythm section instrumentalists and artists who briefly performed together as the House Guests in 1971, but are best known by other names. Initially formed as the Cincinnati-based R&B band, the Pacemakers, when performing with James Brown they became the Original JB’s. After they left Brown, the group toured as the House Guests until they were persuaded by George Clinton to form the new rhythm section for Funkadelic in 1972. Under Clinton, they helped lay the foundation for P-funk, fusing the music with “dimensions from cosmic jazz, fusion [and] acid rock.” Another side project included the group Complete Strangers, and a few years later, Bootsy’s Rubber Band. Collectively, the House Guests/Complete Strangers are considered some of pioneers and progenitors of the airtight polyrhythmic sound that is funk.

The members of these bands include bassist William “Bootsy” Collins, singer Rufus Allen, drummers Frankie “Kash” Waddy and Gary “Mudbone” Cooper, trumpeter Clayton “Chicken” Gunnells, guitarist Phelps “Catfish” Collins, and saxophonist Robert “Chopper” McCollough, among others. The tracks on My Mind Set Me Free are split among three different groups and feature songs that describe the social and political climate of the early 1970s, while also infusing the party element of funk that gets people on their feet dancing to the music.

Setting the tone for the album is the title track, “My Mind Set Me Free.” This song begins with a funky interpretation of Lalo Schifrin’s Mission Impossible theme that leads into the tight sound the House Guests were known for during their days playing with James Brown. Lead singer Rufus Allen even emulates Brown’s vocal delivery on this track, singing and speaking in a percussive manner. Other House Guest tracks include “Miss Chicken,” “Be Right Back,” and “What So Never To Dance,” the latter released in 1971 under the name House Guest Rated X though the personnel remains the same.

The next section features the Complete Strangers’ “Fun in That Thang pt.1 and pt.2,” originally released in 1972 as a single on the obscure General American Records label (GAR 321). One can hear how the elements of psychedelic “space” were beginning to be introduced, with the “wah wah” pedal controlled guitar sound featured in different parts of the song. These elements are also found in the final section of the album, with three songs attributed to “Bootsy, Phelps and Gary” dating from around 1974. These tracks, “Say Something Good,” “Together in Heaven” and “Love and Understanding,” are heavily driven by the use of the Clavinova keyboard (featuring Sony Talbert), Hammond organ (featuring Michael Gaston) and guitars with pedal effects.

The House Guests: My Mind Set Me Free is an album for the young “Funksters,” as Bootsy refers to them. It will have you moving to the music and thinking about the social and political issues right in the middle of the party. For older collectors and fans of the Ohio funk sound, consider this to be an invaluable addition to the catalog.