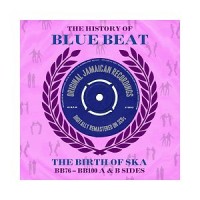 The music that helped to welcome Jamaica’s independence from Great Britain in 1962, known as ska, was heralded as the first uniquely Jamaican music to come out of the country. Indeed, the walking bass line and emphasis on playing the upbeat which characterized the music eventually paved the way for subsequent genres including rocksteady and reggae. However, ska was not an overnight creation. Before the optimistic tones of independence, Jamaica fell in love with American rhythm and blues, brought to the island via Jamaican seasonal workers.   Finding this dance music extremely infectious, local acts began incorporating elements into their performances. And for Jamaicans leaving their country to find work in places such as the United Kingdom, the demand for the music of their homeland grew significantly. This demand ultimately culminated in the formation of the English record label Blue Beat, which became famous for releasing some of the earliest Jamaican R&B and proto-ska tunes.

Over the past few years, the importance of Blue Beat has been recognized by the various labels compiling and re-releasing material from the Blue Beat catalog. Not Now Music is one such label, releasing a slew of singles with the goal to ultimately make available all A & B sides—an essential task for Jamaican musical history. The third set in their series, The History of Blue Beat: The Birth of Ska BB76-BB100 contains all A & B sides from the 76th to the 100th Blue Beat singles.

Through these songs, some of the earliest hints at what would eventually become ska emerge. Piano and guitar will periodically play strictly on the upbeat. In fact, some of the fathers of ska are featured on this compilation: Derrick Morgan, Alton Ellis, and even Prince Buster indirectly through Busters Group. Early Blue Beat songs alluding to the ska format include Derrick Morgan and Yvonne’s “Meekly Wait,” where the guitar rides out the entire song playing solely on the upbeat. But just as one is introduced to this new form, the accompanying B side “Day In Day Out” returns to an American-style R&B ballad. What is probably the most unique and interesting song on this compilation, however, concerns the Winston & Roy track “Babylon Gone,” featuring Count Ossie. This song is one of the earliest musical mentions of the Rastafarian “Babylon” and includes African drums in a Niyabinghi style which, as Rastafari became more prevalent in the Jamaican music scene, was evermore incorporated into popular reggae songs. The B side, “First Gone,” is even crazier— the rhythm and blues side of things is even more pronounced, yet the African drumming continues throughout.

While this set only covers a very small part of the Blue Beat catalog, it’s enough to convince this listener that the influence Blue Beat had on later Jamaican genres was both crucial and undeniable. Additionally, through the release of these compilations, there is indeed a clearer picture of the birth of ska. The  Blue Beat  singles showcase a turning point away from a Jamaican copy of rhythm and blues to the  creation of the first truly unique form of Jamaican music .