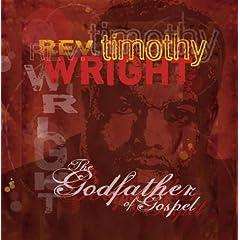 Title: The Godfather of Gospel

The Godfather of Gospel is an 18-track two disc collection of songs that pays tribute to New York native Rev. Timothy Wright, whose passing on April 24, 2009 resulted from injuries sustained in a car accident which also claimed his wife and grandson.  The collection celebrates Rev. Wright’s uniqueness as a songwriter/producer/artist throughout his recording career over multiple decades, as well as his evangelical mission to spread God’s word through song.

Several tracks on this project are notable hits from the past that will have the listener remembering when the Sunday morning worship service was filled with exuberant praise initiated by Rev. Wright’s psalmody. For instance, “Trouble Don’t Last Always” is a medium tempo groove that is funky enough to lift listeners from their seats and profound enough to conjure up praise that comes from knowing that joy may not arrive when one desires it, but it is always on time. “Who’s On The Lord’s Side” is an up-tempo track incorporating a lyrical spinoff of the Biblical Old Testament scripture in Exodus where Moses challenged the Israelites who strayed into a sinful state to choose whom they will serve (Exodus 32:26). Rev. Wright adapts this historical challenge to modern times, requiring the listener to search one’s self deeply and truthfully in order to realize his/her extent of commitment to the gospel—the Lord’s side.

“We’re Going To Make It,” featuring Myrna Summers, can still be heard on Sunday mornings as churchgoers seek hope in the midst of socio-economic, political and spiritual indecisiveness that permeates contemporary society. It is a ballad that frames the affirmations of Christians within the strength and power of Jesus Christ, thus prompting them to assert, “we’re gonna make it.” Although very repetitious, “We’re Going To Make It” maintains a steady momentum via its harmonic progression, which contributed to the broadening of gospel music parameters in the 1990s, while Rev. Wright’s and Summers’ lead vocals are articulate, well placed, round, extensive in range, controlled and highly interpretive. Simply put, they provide a clinic for aspiring listeners who wish to become effective singers in the gospel genre. In addition to the harmonic pallet and lead vocals, the choir background on this track, as with all of the songs on the album, exemplifies the best of traditional gospel ensemble singing encompassing triadic harmony, blended unison lines and enormous amplitude output during climactic sections.

While disc one of this collection includes more well-known songs from Rev. Wright’s illustrious career (the songs mentioned above are all on disc one), disc two also presents timeless jewels that are note-worthy such as “Been There Done That,” “I Know A Man,” and “Certainly Lord.” If you are seeking to experience a tribute compilation that is musically sound, this CD delivers. If you would like to hear a collection that actually includes the hits of an artist, this is a must have. And finally, if you want to realize how gospel music speaks to the social and spiritual needs of people around the world, The Godfather of Gospel is a quintessential example. I give it a thumbs-up for song choices, musicianship, interpretive value and, most importantly, the gospel message.