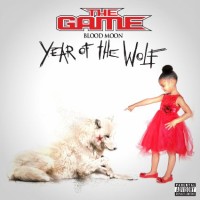 Blood Moon: Year of the Wolf was initially slated to be a compilation showcasing The Game’s Blood Money Entertainment label; to The Game’s detriment, it was released as his tenth solo album.  Given the glut of guest appearances and inconsistent production, it certainly sounds like a poorly-curated compilation.  The Game doesn’t even show up on three of the album’s tracks, but by the time the album’s over, who’s going to complain?

“Bigger Than Me,” Blood Moon’s lead single, exemplifies The Game’s biggest problem as a rapper: he continues attempting to situate himself among hip hop’s royalty through name dropping rather than great lyricism, storytelling, or even personality.  He comes across as desperate at this point, calling himself the “Black Marshall Mathers” while making homophobic references to Frank Ocean again (see “Freedom” on 2012’s Jesus Piece), and it’s clear The Game is trying to stay relevant by adopting 2014’s trends in flows and beats (as heard on “Really”).

All that said, Blood Moon: Year of the Wolf does have its strong points.  “The Purge” is a powerful indictment on the plagues affecting black communities; “Trouble On My Mind” and “Food For My Stomach” are similarly reflective showcases for Blood Money Entertainment signee Dubb; and Freddie Gibbs and Bobby Shmurda (whose “Shmoney dance” is referenced throughout the album) show up on “Hit Em Hard” for some good-natured gun talk.  Let’s hope The Game saved the goods for The Documentary 2, the sequel to his highly-regarded 2005 debut, slated for release on its 10th anniversary.