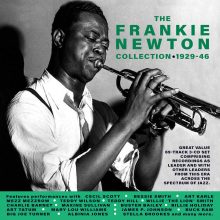 Though perhaps unknown beyond the circle of jazz collectors, Frankie Newton is widely recognized by jazz critics as one of the foremost trumpet players in the history of the genre. Newton performed in nearly fifty recording sessions as sideman or as leader from 1929 to 1951, and nearly half of these sessions are represented by at least one of the original 78-rpm sides in this new three disc collection from Acrobat. Clearly this a comprehensive and convenient point for listener’s to learn about and enjoy Newton’s artistry. But where to begin?

One of the highlights of the set is “Gimme a Pigfoot” (track 5, CD 1). For some, the most recognized leader of these recording sessions may be Bessie Smith. The two songs featured here are from her final recording session, supervised by John Hammond. One of my deceased collector friends, Bill Coverdale, was a classmate of Hammond’s while both were enrolled at Yale University in the early 1930s. As a result, Hammond invited him to come to the bar where these musicians all gathered after completing the recordings for Columbia Records. My friend told me how he spoke to Frankie Newton extensively on that occasion, and that Newton expressed deep regret that he had not played better. If you listen closely, you may come to agree with Newton’s assessment.  While this may not be the best point of entry to this collection, the artistic standards for the Bessie Smith sessions were high since they also included Benny Goodman and Jack Teagarden. You won’t be disappointed.

Another recognized name is, of course, Billie Holiday. Newton is one of her supporting musicians on “I Gotta Right to Sing the Blues” (track 6, CD 3). His performance is much stronger on this track, and the session also produced Holiday’s famous performance of the iconic song, “Strange Fruit” (not included here).

To my mind, the most exhilarating performances are those of Frankie Newton and His Uptown Serenaders on tracks 18-20 on CD 1, representing his first session as the leader. Cozy Cole sets a solid rhythm with his drum work, inspiring Newton and the other soloists. Here Newton reaches artistic heights not yet achieved in any of the earlier recordings.  It is a tough call, but “Please Don’t Talk About Me When I’m Gone” (track 19, CD 1) is arguable the best of these three. This may be the best place to begin if you are sampling the performances in this set.

But there are other high points within this collection. The entire sequence of tunes by Frankie Newton and His Orchestra (tracks 14 -23 on CD 2) is consistently exciting when simply allowed to play in order. Interestingly, “Honeysuckle Rose” (track 20) is from an aircheck of a live performance from New York City’s Café Society in 1939.  The others were recorded by Bluebird and Blue Note Records. Collectively, Newton has assured his position in the history of jazz with these performances.  The liner notes single out “The Blues My Baby Gave to Me” for highest praise. “Where or When” (track 4, CD 2), from Newton’s third session as the leader, is yet another masterpiece, nested within other wonderful performances from this session. “Emperor Jones” (track 7, CD 2) finds Newton as a featured guest with Charlie Barnet’s big band, showing his ability to stand out even in a large orchestra.

“Lady Be Good” (track 12, CD 3) is a live recording from Monroe’s Uptown House in New York captured by Jerry Newman on the disc recorder he brought to clubs. This is a remarkable setting and performance, although I slightly prefer the other accompanying track on the original Onyx LP that is not included in this set. Art Tatum is, of course, one of the most accomplished jazz pianists and Newton was, therefore, in challenging company.

“Light’s Out” (track 9, CD 1), recorded a year before Newton’s first session as a leader, is perhaps the point that best foreshadows the maturation of his artistry that follows. Though the track is an important benchmark in his career, the performance does not reach the level of the previously mentioned sessions.

Other performances on this set are led by Benny Carter, Mary Lou Williams, Teddy Wilson, Willie “The Lion” Smith, Maxine Sullivan, and Mezz Mezzrow, all names you will likely recognize. So, whether you are curious to discover a legendary artist you have not heard, or if you wish to acquire a superb overview of an artist with whom you are already familiar, you should consider purchasing this collection. The audio quality captures the sound of the original recordings as much as possible, although those 78s did not always allow adjustment of recording levels to capture each soloist as clearly as we might like. This will not distract from your considerable enjoyment.  There have been other reissues of these recordings, including those by Mosaic Records, which are not currently available. Likewise, the original 78’s cost much more from auction lists. In comparison, The Frankie Newton Collection 1929-46 is an excellent value and the accompanying booklet is superbly prepared. Highly recommended!

I close these comments with a personal note. I am in the process of donating my extensive jazz collection to the Cook Library in the Jacobs School of Music at Indiana University. Among these items is an undocumented two-sided 8” acetate of Frankie Newton with the Charlie Vinal Rhythm Kings in Boston, recorded late in his career. This is one of a number of previously unknown recordings that I have proudly supplied for issue on various CD’s when suitable situations arise. So perhaps someday… As a final note, Ruby Braff who Tony Bennett called the finest living cornetist during his lifetime, crossed paths with Frankie Newton at George Wein’s Storyville Club in Boston and admired him greatly as an improviser who respected the melodic foundation of each song.