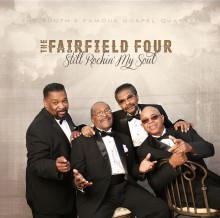 The Fairfield Four, a vocal quartet that has existed for almost a century, presently includes Levert Allison (tenor), Larrice Byrd, Sr. (baritone), Bobbye Sherrell (tenor) and Joe Thompson (bass). The quartet has been dedicated to performing traditional gospel music in the traditional “a cappella” manner since its founding in 1921. Jerry Zolten, who penned the liner notes, characterizes the a cappella singing style of the Fairfield Four as “intertwined voices rhythmically pulsating in harmony, anchored by a deep bass, lead vocal over the top” and “rooted in that hazy past before the era of recorded sound.” This history is recounted in the PledgeMusic video promo for the album:

The traditional bent of the Fairfield Four is easily understandable when one recalls that the ensemble originated within Nashville’s Fairfield Baptist Church. Their prominence was heightened by the role played by their songs. For example, Zolten explicitly indicates that their “voices were heard on the soundtrack that inspired and propelled the Civil Rights Movement,” including the song “Don’t Let Nobody Turn You Around” (track 9).  The Fairfield Four therefore see themselves as bearers and custodians of a tradition. Larrice Byrd, Sr. comments, “We all grew up listening to this style of music and we understand it. We want to keep the tradition alive forever.”

The Fairfield Four’s new album, Still Rockin’ My Soul, is their first release in almost 20 years. Concerning the musical selections, Zolten affirms that “the songs collected here are all part and parcel of the traditional Fairfield Four canon.” The opening track, “Rock My Soul,” is accompanied only by hand clapping and foot tapping, while on the spiritual “Children Go Where I Send Thee” country music singer Lee Ann Womack joins Joe Thompson on lead vocals. In “I Love the Lord (He Heard My Cry)” and the reprise which closes the album, one hears the organ accompanying a melodic chanting characteristic of the African American devotional line-out hymn. Additional tracks include “Come on in this House,” “Baptism of Jesus,” “Jesus Gave Me Water” (by Lucie E. Campbell), “My Rock,” “I Got Jesus and That’s Enough” (by Dorothy Love Coates), “Don’t Let Nobody Turn You Around,” and “Highway to Heaven” (by Thomas A. Dorsey).

In sum, if one accepts the fact – and this, with good reason – that the human voice is the best of musical instruments, then the Fairfield Four exemplifies this in a most convincing way on Still Rockin’ My Soul. Gospel music historian Bil Carpenter has mentioned the instrument-like timbre of the Fairfield Four quartet, noting that “when the Fairfield Four sang, they utilized the full extent of their voices, moving easily from deep, rolling basslines to the staccato upper peaks of the tenor range, all executed with precise, intricate harmonies and ever-shifting leads.” Call it instrumental vocality, or vocal instrumentality, if you like!