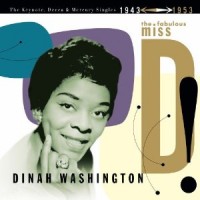 Need the perfect gift for your parents? This box set is so new we don’t even copy a copy yet, so the following description was excerpted from Amazon:

Dinah Washington was the undisputed Queen of the Jukeboxes in the late 1940s and early 1950s, the pre-LP, pre-45s era when that title meant everything. The Fabulous Miss D! chronicles the first 10 years of her extraordinary short-lived career. The 4-CD box set includes 107 tracks: 102 of them formerly issued as 78-rpm singles from the Mercury label, the rest are her previous singles for Keynote (later reissued on Mercury) and her one-off release for Decca as lead vocalist of the Lionel Hampton Orchestra, where she got her start. This is the first time all of these original, pre-LP-era singles have been available in one package.  Highlights include Washington’s biggest chart hits, including “Evil Gal Blues,” “Ain’t Misbehavin’,” “West Side Baby,” “Am I Asking Too Much” (her first R&B chart No. 1), the two-sided smash “Baby Get Lost”/”Long John Blues,” “Trouble In Mind,” and many more. She was backed by the leading lights of the studio jazz musicians in New York and Chicago, including Ray Brown, Wynton Kelly, Jimmy Cobb, Keter Betts and others. All of the songs have been significantly restored and remastered, making Dinah’s voice–one moment surging with sincerity and the next snapping like a whip–sound better than ever.