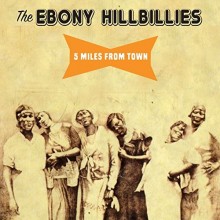 After four successful albums and TV appearances on the BBC and ABC’s “Good Morning America,” The Ebony Hillbillies are back with their latest album, 5 Miles From Town. The group, which hails from the streets of New York City, is keeping African American string band traditions alive for new generations. Their fifth album features 12 tracks that seamlessly combine pop, folk, bluegrass, and jazz to create The Ebony Hillbillies’ trademark sound.

In addition to reviving string band music through tracks such as “Hog Eyed Man,” a classic 19th century American fiddle tune from the Upper South, the group also offers new songs with strong social commentary. The gritty “Another Man Done Gone (Hands Up Don’t Shoot)” explores the issue of police brutality, while the similarly-themed “I’m On My Way To Brooklyn” ends with the ominous sound of gunshots.

The album concludes with the title track, “Five Miles From Town,” a very lively rendition of the old-timey classic that’s punctuated with plenty of whoopin’ and hollerin’ before fading out on an extended percussive improv section with hints of jazz.

Almost 15 years after the release of their first album, The Ebony Hillbillies continue their mission to educate and inspire, fusing the sonic textures of the past with contemporary music elements and socially-relevant lyrics.  5 Miles From Town lives up to the legacy created by the Manhattan-based band and offers a fresh take on the sound that listeners love.