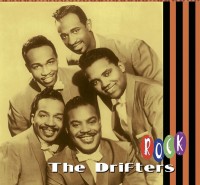 The latest release in Bear Family’s “Rock” series highlights the Drifters, “the most important R&B vocal group of two different and distinct eras.” The legendary Clyde McPhatter led the Drifters from 1953 through early1955 during the group’s initial chart topping streak and the rise of rock ‘n’ roll. Their first sessions produced several hit songs (included here) that would have an impact on the development of rock, such as the uptempo “Money Honey” famously covered three years later by Elvis Presley; the sexual innuendo laden “Such a Night” which spawned several watered-down versions by white artists (including Elvis); the even more explicit songs “Bim Bam” and “Honey Love” which white artists wouldn’t dare cover; and the gospel inspired “What‘cha Gonna Do” penned by Ahmet Ertegun.

After McPhatter embarked on a solo career, the group went through a string of lead tenors, each represented on this compilation.  Bill Pinkney is featured on “No Sweet Lovin’” and “I Gotta Get Myself a Woman” (with Johnny Moore), plus two sides he recorded with The Turks immediately following his initial dismissal from the Drifters. Johnny Moore took over as lead in 1955 and is included on eight tracks highlighted by the rocking “Ruby Baby” (by Leiber and Stoller) and “Sadie My Lady.”  Bobby Hendricks gets his share of the spotlight on “Drip Drop” and “Suddenly There’s a Valley,” neither of which received much attention at the time, undeservedly so.

After a fateful gig at the Apollo led to a firing of the group en masse by manager George Treadwill, he formed the “new” Drifters out of the Five Crowns, which just happened to feature a young Ben E. King who sang lead on the Latin-based “Hey Senorita” in 1959. Though King soon departed for fame and glory, his influence propelled the group’s second rise to fame during the birth of pop-oriented uptown soul in the 1960s through songs such as “I Feel Good All Over” and “Baltimore” (featuring Charlie Thomas on lead tenor, Elsbeary Hobbs on lead bass and King Curtis on sax), as well as “If You Don’t Come Back” which heralded the return of Johnny Moore. The disc concludes in 1963, prior to the British invasion, after which rock gradually lost its roll.

Though there are countless Drifters compilations, you can’t go wrong with this expertly mastered set if you wish to explore the R&B foundations of rock and roll. The accompanying 50 page illustrated booklet includes extensive liner notes by Bill Dahl, along with complete session details for the 32 tracks.