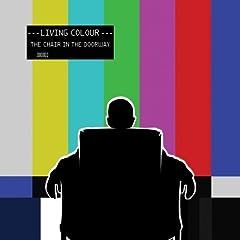 Title:  The Chair in the Doorway

Living Colour has just released its fifth CD project, The Chair in the Doorway, which highlights a plethora of musical styles that the band has mastered over the last three decades. This New York-based band, formed in 1983 by guitarist Vernon Reid, garnished industry attention in 1988 with their hit “Cult of Personality” from their debut album, Vivid.  Since then, Living Colour has experienced a broad range of interest as a result of national and international touring, subsequent CD releases and their association with the Black Rock Coalition, a national organization devoted to complete creative freedom of Black artists, of which Vernon Reid was one of its founders.

The eleven tracks on The Chair in the Doorway highlight why Living Colour continues to be in demand by musicians and music lovers who defy the notion of artistic boundaries.  While the lyrical content seems dark upon first listen, it is couched in a spectrum of expressions that warrants attention.  For instance, “DecaDance” presents the story of moral decay as one climbs the ladder of success governed by a never-ending desire for more.  This track has a typical rock sound, with power chords holding down the harmonic and rhythmic drive while a screaming guitar solo paints the image of corrosion amidst shallow abundance. “Method” creates a two-fold picture, seen from the perspective of one coming down from a drug high, as well as from one who evaluates the reality of social forces that conjure up chaos, yet also exist as an organic, rational, and expected dimension of life itself.  The track flows like a hypnotic merry-go-round both lyrically and instrumentally, with its evasive yet committed rhythmic and melodic loops.

Following is a clip of Living Colour performing “DecaDance” at Leverkusen Jazztage Nov. 3, 2008:

“Bless Those” is a straightforward bluesy funk that plays on sacred/secular fluidity both in lyrical and musical structures. The climactic phrase “those that can go either way” in the hook positions “Bless Those” (or those blessed) within the parameters of human experience, wherein a constant identity struggle occurs.  The hybrid structure of funk, blues, and rock in this track exemplifies such conflict and, ultimately, its resolution in musical terms.  While “Bless Those” highlights the two-sided coin of human existence, the track also represents the totality of The Chair in the Doorway: at any given time, most, if not all, of us become manifestations of obstacles and entry points into the societal hierarchy that produces haves and have-nots, as well as the emotional baggage that comes with every status level.  This project may not be for those on the edge, as it might push them over.  It is, however, for those who recognize the inconsistencies, tribulations, and triumphs that are germane to life itself, and who wish to have a musical soundtrack that spells it all out.