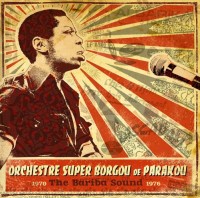 In a thoroughly and beautifully packaged CD album, Analog Africa brings us a band from a distant corner of the world and a somewhat distant past.  Although certainly “world music” in that it is not from or of Europe or America, this band’s catchy licks and contagious beats make the exotic music accessible and downright enjoyable on tracks such as “Wegne’Nda M’Banda.”

According to the superb album booklet, in the early and mid-70s, in northern Benin, the Orchestre Super Borgou de Parakou was unrivaled. They ruled the dances, won national band competitions and gained enough following to be recorded and their music distributed throughout Africa and into Europe.

The band’s story is a story of the gradual modernization of post-colonial Africa.  Founder Moussa Mama (1947-2007) was the son of a musical pioneer, Alpha Sekou Mama.  The elder Mama came from a long line of blacksmiths and goldsmiths, and left his home in Parakou, in the Borgou department of Benin to work in Accra, Ghana. He returned home a few years later with Highlife music, according to an interview with his son in the album booklet.  The elder Mama then started a local band and began teaching his son and other youngsters what was then modern music.  Other African musicians traveled to Parakou and joined the elder Mama, and brought with them new electronic amplified instruments. Moussa Mama literally grew up in African popular music of the 1960s, and formed his own bands starting in his teenage years, focusing on electric guitar and later electric organ.

By 1970, his band had coalesced into the Orchestre Super Borgou de Parakou. Their sound was an early version of what became known as Afro-funk—driving rhythms, sharp beats and frequent smatterings of guitar and organ runs.  Like many contemporaries, Mama preferred a distorted organ sound resembling a Farfisa more than a Hammond B3.  Guitar runs by Mama and his rhythm guitarist Menou Roch were often fluid and lyrical, with the other guitar sticking to percussive chords.  Also in the band was Bori Borro, described as “West Benin’s foremost drummer,” and certainly an able rhythm-driver.

The next story in the genesis of this album was how an obscure but highly creative band from the northern part of a remote country ended up turning out a string of records in the 1970s.  By 1969, the younger Mama’s band ended up as the house group at a bar in Niger’s capital, Niamey.  There, they caught the attention of the owner of Albarika Store, then a music store diversifying into record production.  An EP by Orchestra Super Borgou was the label’s first release in 1970. The Albarika Store label went on to be a force in 1970’s Afro-funk.

Meanwhile, a Parakou, Benin entrepreneur named El-Hadj Mama Adam (1947-1999) started the region’s first record label, Discadam, in 1972.  The first band he recorded was Orchestra Super Borgou.  All of the cuts on this CD are from the Albarika Store and Discadam sessions (Adam issued records under several labels as his company grew, and his later sessions were recorded in stereo).

With all of that background, a reader who made it this far is probably curious about the music.  First of all, there are no English lyrics—everything is sung in either Bariba or Dendi languages.  However, the booklet contains English translations of the lyrics.  This music is so infectiously funky and the playing so tight and skilled that, lyrics be damned, it’s universally appealing. The album tells a very interesting story, and the music bears repeated listening. Recording quality is also surprisingly good when one considers the time and place.