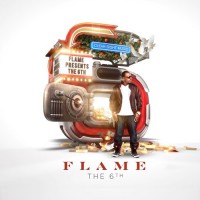 Christian rapper and record label owner Marcus Gray or “Flame” graces our ears once again with his sixth album appropriately titled The 6th. While this title reflects his continued musical success, it also indicates the thematic premise of this project by referencing the biblically cited point of man’s origin, the sixth day (see Genesis 1). Flame considers this project a “study of anthropology that takes a look at mankind from many different angles.” In this regard, he addresses issues like the identity and purpose of humans while continually concluding that love, peace, and one’s life objectives are inextricably linked to God.

The story of Adam and Eve are front and center with two songs, “The 6th Day” featuring Chris Lee, and “The Great Deception” both broaching the subject of creation. In the former, Flame rhymes over a pop inspired beat, discussing humans as being made in the divine image of God for the purpose of “praising [His] holy name.” The latter presents a darker, sobering depiction of what is known as the “fall of man” in which Adam and Eve eat a forbidden fruit and are subsequently punished by God. In this selection, Flame offers flashes of brilliance as he transforms this historical account into a relevant commentary on the ways in which Satan works to deceive humans into succumbing to temptation and sin.

Throughout the album Flame remains rather direct in his discussion of human’s need for God despite what appears to be their manmade successes. For instance, the selection “Trap Money” featuring Thi’sl and label mate Young Noah, suggests a dismal outcome for individuals who have amassed “good money” from selling illegal drugs. The temporary financial success will ultimately be useless in matters of the soul.  Similarly, in the song “Man” Flame considers great human achievements, such as sending a man to the moon and the building of the Great Wall of China, to be earthly blessings that will garner no benefit after death.

The 6th is characterized by extensive exploration of the good and evil aspects of human existence. To balance the hopelessness that he suggests was spawned by “the fall,” Flame provides positive solutions. In the song “Scripture Alone” he offers a rather pointed argument supporting the authenticity and credibility of the bible. He provides well-crafted rhymes inviting listeners to read and believe the words written in this text as part of a key to living a better life. Lastly, the final selection sums up Flame’s underlying message throughout this project. Featuring Christian rock band DecembeRadio, “Let Go” states that true life, love, and acceptance can only be found in Christ. Following is the official video:

The 6th is an enjoyable project full of substance and food for thought. While there were a few moments in which the lyrics lacked ingenuity, overall Flame’s work satiated my appetite for solid beats, nice rhymes, and meaningful content.