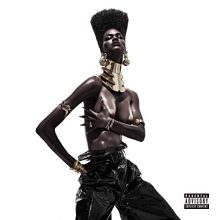 Dancer/choreographer, actress, model, and R&B superstar Teyana Taylor has released her long awaited and highly anticipated third studio album, The Album. With a host of producers, including Taylor herself, this album truly showcases her personality, sexuality and vulnerabilities that lie under her persona. The Album features collaborations from a plethora of artists, such as Rick Ross, Erykah Badu, Quavo, Kehlani, Missy Elliott, Future, Big Sean, Ms. Lauryn Hill, King Combs, Davido, and Taylor’s husband and daughter, Iman Shumpert and Junie.

The Album is the successor, and somewhat of a corrective, to Taylor’s previous 8-track release, K.T.S.E., which was executively produced by Kanye West. With issues regarding unapproved production, sampling rights, and a premature release, K.T.S.E. was indicative of a project produced without Taylor’s autonomy and control, things which she strives to take back with this new project. “When people hear the album, they will understand what my frustration was with K.T.S.E. Trying to put a lot of emotion within seven songs is tough. To have a full album, you get to literally express yourself and every single part of you,” she said in an interview with NPR.

At 23 songs, The Album is several times longer than K.T.S.E., making this Taylor’s largest and most dynamic body of work to date. The project opens with an atypically intimate intro, where Shumpert is heard delivering their first child, Junie. This track sets the major themes for the album, such as familial love, personal growth, and desire. The ideas of family and motherhood are explored further on the following tracks “Come Back to Me” and “Wake Up Love,” with Junie’s innocent and playful voice in concert with Taylor’s signature low, raspy vocals. “Morning” finds Taylor delivering sensual and sultry lyrics alongside Kehlani, and the DJ Camper-produced “1800-One-Night” has a sort of ‘TV ad’ quality, experimenting with foreplay as a commercial jingle. There are also a few tracks that provide an update to classic R&B, with songs like “Lowkey” featuring Erykah Badu, “Boomin” featuring Missy Elliot, and “We Got Love” featuring Ms. Lauryn Hill.

The Album is a love letter to classic R&B. However, like many R&B artists at the moment, Taylor provides a significant amount of references to 90’s era R&B, making her newest project seem a bit too derivative. This leads to a couple of tracks that sag due to a seeming lack of inspiration. All that said, the essence of this project is discovering and exploring Taylor as an artist, a wife and a mother, and this is done extraordinarily well. In conclusion, The Album succeeds in providing a very enjoyable listening experience, proving that the comfort of familiarity is a tried and true way into any R&B fan’s heart.