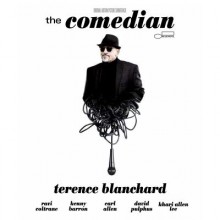 Terence Blanchard is a name you are probably familiar with, even if you’re not a jazz person.  Apart of the scene for quite some time, Blanchard replaced his fellow New Orleans mate, Wynton Marsalis, in Art Blakey & the Jazz Messengers. Before Blakey, Blanchard made his bones with the great Lionel Hampton.  Now, if you are still in the dark and the name just don’t ring a chime, Blanchard is perhaps best known for his collaborations with filmmaker Spike Lee. Together, they have become quite a tandem, with Blanchard scoring many of Lee’s films including Summer of Sam, Clockers, Miracle at St. Anna, Mo Better Blues, When The Levee Breaks, Jungle Fever, X and Chi-Raq. Blanchard has also worked with other filmmakers, including Kasi Lemmon. With over forty film scores to his credit he’s one of the most productive jazz musicians ever.

The album starts off with “Jackie in the Rain,” which could be mistaken for the Vince Guaraldi Trio. Yes, it has a very identical sound, but hip and catchy. Maybe it’s Kenny Barron on piano that makes it sound like a scene from Charlie Brown. Please don’t be offended

All the tracks have cool titles. “Electricity On MacDougal” features bass playing at very rapid speed by David Pulphus, but Blanchard stays with him, note for note. Almost as if he was toying with him. Yes! “Tit For Tat Nocturne” is mellow 10pm cocktail jazz. Again Kenny Barron on piano shines bright. The band members all get their shine on The Comedian.  After all, that’s what jazz is all about.

Terence Blanchard’s score for The Comedian is nothing to laugh at. It better be taken serious, by a serious trumpet player in the game.