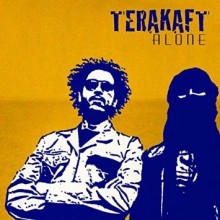 With aggressive pounding drums and fuzzy guitar lines, the first track on Terakaft’s Alone, “Anabayou (Awkward)” completely blew away my expectation of the band’s “desert rock.” The group’s fifth album Alone presents a new side of Terakaft, bringing more uplifting and danceable music than its previous album Kel Tamasheq, which was released after the political and religious struggle in Mali in 2012.

The incursion of Islamic fundamentalists into their home region, northern Mali in 2012 cast a shadow over the members of Terakaft. “Perhaps there’s a harder edge in the music because of what happened in Mali in 2012, but it’s an unconscious thing. Our goal with this was to make the songs very danceable,” says the guitarist and singer Sanou Ag Ahmed. Now that the Islamists have gone, the message Terakaft presents on this new album is that there is vital and energetic space for music in the desert.

“Calling for unity” is a theme of the album, which is apparent in the lyrics “stop telling stories and lies” from “Karambani (Nastiness).” The album includes not only new songs but also older numbers, such as “Amidinin Senta Aneflas (My confidant),” which certainly have timeless messages for the transnational as well as Tuareg audience. As on the band’s former albums, traditional percussive rhythms and hand clapping underlie most of the nine tracks on Alone. Layered guitar lines and various sound effects add additional flavor to the music and feel as though they circulate around listeners’ bodies.

After several lineup changes in the recent years, Terakaft is currently a 4 piece band. Guitarist and vocalist Liya Ag Ablil (aka Diara) and guitarist Sanou have been joined by Nicolas Grupp (drums) and Andrew Sudhibhasilp (bass), both of whom are French jazz musicians. Here’s a glimpse of the recording process and an interview with producer Justin Adams:

The album ends with a different version of the opening track “Anabayou”; the contrast between the opening danceable version and the latter more modest version without the group’s signature percussion indicates the difference of styles as the group’s members go back and forth in their life between sound in the desert and sound on the global stage.