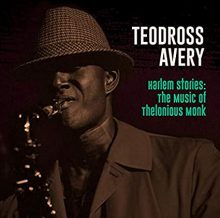 Soprano and tenor saxophonist Teodross Avery developed a keen interest in the music of Thelonious Monk as a teenager, after hearing the acclaimed jazz pianist’s landmark 1963 album Monk’s Dream. After repeated listening, Avery says, “It became clear to me that Monk wanted his complex melodies and harmonies to affect the musicians and the listeners alike with non-stop swing rhythms…He wanted that swing beat to just permeate the sound while he delivered his unique sound on top.” Avery went on to earn a Doctorate in Jazz Studies from the University of Southern California and along the way performed and recorded with many jazz titans as well as artists ranging from Leela James and Lauryn Hill to Mos Def and Talib Kweli. But for his latest project, Avery decided to return to his early fascination with Monk and take a much deeper dive into the complexities of his music on Harlem Stories: The Music of Thelonious Monk.

Most jazz aficionados are aware that in the 1940s Monk was the house pianist at Minton’s Playhouse, a club located in the center of Harlem. One of Avery’s goals for the album was “to make sure that we brought the feeling and the spirit of Harlem into the music. Harlem has always been the center of Black American urban culture since the 1920s and I just wanted to capture that feeling in the music.” Carefully selecting artists for the recording sessions who shared this vision, Avery also wanted to ensure that each musician “understood Monk’s concept of rhythm entirely on their own terms.” He finally decided to form two different quartets, evenly represented on the album with five tracks each.

For the first half of Harlem Stories, Avery is backed by pianist Anthony Wonsey, bassist Corcoran Holt, and drummer Willie Jones III (president of WJ3 Records). Opening with two of Monk’s most popular tunes, “Teo” and “Monk’s Dream,” the quarter comes out swinging in full force with a nod to a classic hard bop style. On “Monk’s Dream,” Jones propels the group forward with a driving tempo, while Avery weaves intricate solos over the rhythm section. On another Monk favorite, the ballad “Ruby My Dear,” Avery demonstrates his lush tone and phrasing, while Wonsey draws the track to a close with beautifully rendered flourishes on the keys that hint at his early classical training. This set concludes with “Rhythm-a-Ning,” a work first recorded by Monk in 1957 with Art Blakey’s Jazz Messengers that references the chord changes in Gershwin’s “I Got Rhythm.” Once again, Avery selects a punishing tempo, but certainly rises to the occasion.

The second half of Harlem Stories features Avery with pianist D.D. Jackson and drummer Marvin “Bugalu” Smith, with Holt once again on bass. Opening with “In Walked Bud,” Monk’s tribute to jazz pianist Bud Powell, listeners are introduced to Jackson’s intricate and wonderfully complex keyboard stylings. Picking up the soprano sax on “Ugly Beauty,” Avery soars over the ensemble while Jackson takes an extended, very percussive piano solo that breaks up the smoothly flowing waltz. The tour de force is “Trinkle Tinkle,” a composition that harkens back to Monk’s days playing at Minton’s Playhouse and serves as his homage to the giants of Harlem stride piano. Leading the way on keys, Jackson’s style is perfectly suited to this piece, referencing the likes of Willie “the Lion” Smith and of course Monk himself, while maintaining a high degree of originality. Avery is in perfect sync, matching the intricate passages tossed off by Jackson and creating plenty of his own. Closing with “Boo Boo’s Birthday,” written for Monk’s daughter, the celebration comes to a fitting close as the quartet returns to a moderate swinging tempo that allows space for many satisfying solo turns.

Using two different quartets to explore Monk’s works was a brilliant move by Avery, since it creates more diversity in the interpretations and the album as a whole. On a final note, I must mention the liner notes by Robin D. G. Kelley, author of Thelonious Monk: The Life and Times of an American Original, from which several of the above quotes were drawn. A first rate project from start to finish!