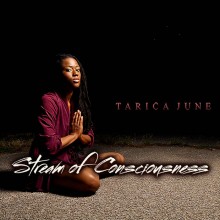 Tarica June’s latest EP, Stream of Consciousness Volume 1.5, takes on a wide range of topics, from gentrification to life as a millennial.  This is the third release from the lawyer and rapper, preceded by Moonlight (2010) and Stream of Consciousness Volume 1 (2014).  Born and raised in Washington D.C., June is carving out her place in a hip-hop community that includes a diverse array of artists, such as Wale, Fat Trel, Shy Glizzy, and of course a host of go-go musicians as well.

Over the course of the EP’s five songs, June displays versatility and leans toward introspection, focusing on her craft, her grind, and her potential to make it as an independent artist. Like other popular rappers today, namely Chance the Rapper, she rejects the necessity of a label, instead releasing her music online.  Her flow is similar to New York rapper Nitty Scott, MC and Chicago’s Noname.  There are also hints of influence from an older generation of rappers, such as Queen Latifah.

The most popular track on the album by far is “But Anyway,” which is an assessment of a rapidly gentrifying DC. As a third generation resident, she reminisces on the days of “Chocolate City,” referencing Marion Barry’s summer youth employment program, DC’s Metro system, as well as heavier topics such as mass incarceration and the displacement that gentrification is causing.  The video, which features June strolling around key sites in DC, went viral in March.  Currently working on her first full-length album, the city is excited to see what comes next from Tarica June.