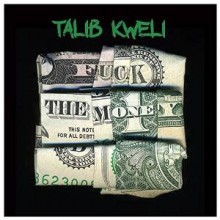 According to the French art theorist Nicolas Bourriad, many of our modernities are defined by moving towards an explosion, or a release of energy. Hip hop, more than most other musical genres, seems to express this quest for explosion, time and again. Despite its recent widespread lyrical decrepitude, millions listen to hip hop because it expresses this explosion. Rapper Talib Kweli, known for his political rap, released the digital version of his latest album, Fuck the Money, for free. He seems to want to explode the capitalism that defines the individual realities that we lead and provide us with a rhythmic, unburdening, existence. It’s a commendable effort that could have been that much better if it was the product of serious thought, and not a fascination with tough slogans and hip hop’s ability to speak to pathos.

The album itself sounds like the electronic production that we are used to associating with expensive beats—it’s charged yet simple, as though there was not quite enough money to purchase even better beats. “Money Good” is the album’s best song, featuring a mix of acoustic and electronic instrumentation that melds perfectly with Kweli’s delivery. “Nice Things” is a great and loud listen, featuring the fast paced, conscious rap that Kweli is well known for. He throws punchlines that are brilliantly woven together into a moral statement, but it’s the song’s agenda that resonates the most. “Echoes” features great rhythm and ambient, dream-like production. The album gets smoother as it progresses, and Kweli is actually much better at being smooth than he is at being loud. “Baby Girl” is an example of this, with Kweli sounding very similar to young J. Cole. On “The Venetian,” featuring Niko Is & Ab-Soul, they rap about their progression from corner stores to luxury hotels.

Though it might be tempting to sit amazed by the A-list of producers featured on the album’s 11 tracks, I would not recommend listening to the album that way. Look at the name of the producer only after listening to the song, and judge the song on its own merits rather than by its credentials. Then, the songs’ limitations and strengths will become apparent.

Has the album led to a Bourriadian explosion? Have I now proclaimed, “fuck the money”? I, personally, have not. Though this album is a commendable effort with the spectacular song “Money Good,” it falls short of fully erupting.