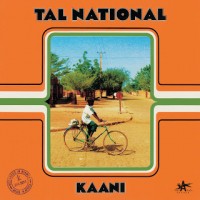 While one of the poorest areas in the world, Niger is nonetheless rich in its outpouring of musics.  From afrobeat and highlife to kora melodies and Tuareg rock, Niger has contributed heavily to the music of Africa and the rest of the globe. This is where Tal National—a talented mix of individuals that have rocked the music scene of Niger—comes in. Through extensive touring and determined self-promotion, the group’s hard work has culminated in their first international release Kaani.  Created within the confines of an old, rundown studio, the sound seems almost unbelievable. Kicking off with the title track “Kaani,” the group’s polyrhythmic precision is immediately apparent. What lies within this album easily shows how the extremely talented Tal National has won international praise.  Their “Trad-Moderne” blend of original compositions and modern interpretations of African folk songs, performed in styles ranging from guitar-driven West African rock to dance grooves fueled by talking drums, are musically tight and engaging.  Kaani is an appropriate global introduction to Niger’s most popular group, who will be touring North America this fall in support of the album.