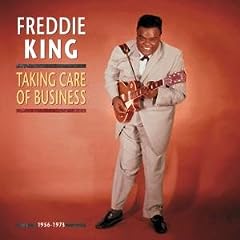 Electric blues guitarist Freddie King has been largely neglected in the annals of rock history, for all that his career spanned three decades and his style strongly influenced newer guitarists from Eric Clapton to Stevie Ray Vaughan.  Part of this is due to his recording history—he jumped from label to label and alternated spellings of his name almost randomly, so assembling his body of work is a challenging effort.  Some of it, too, is that the tracks of his later years are somewhat uneven, as he tried to ride the waves of changing rock/pop styles, spanning novelty dance crazes like the Twist and the Watusi, as well as musical trends such as surf rock and bossa nova.  Finally, since he died at the age of 42 in 1976, it’s impossible to say where his career might have taken him in the past three decades had he lived.  Nevertheless, the “Texas Cannonball” built his own style off of B.B. King’s single-string playing, doing the picking with fingers and thumbs for a more down-home Texas sound, but crossing well into rock territory with fiery solo riffs and passionate vocals.  He was also one of the first Black bluesmen to front an integrated band, a practice continued throughout his career (his penultimate solo album Burglar, released in 1974, was produced and recorded with Eric Clapton, who had already been playing his own covers of King’s songs for ten years.)

Taking Care of Business spans most of King’s career, omitting his last few years and labels.  The first four discs follow his music through the 1950s and 1960s, including influential signature tracks such as “Hide Away,” “San-Ho-Zay,” and “Have You Ever Loved a Woman,” as well as novelty tracks such as “Low Tide (Zoo Surfin’),” “Do the President Twist,” and “The Bossa Nova Watusi Twist.”  They also include alternate takes of some of King’s standards, offering different stylistic interpretations of signature tunes.  The last three discs see King through the late sixties into the seventies, incorporating funk and soul into his sound, as well as including a number of live tracks and untitled instrumentals.  Accompanying the set is a large, lavishly-illustrated hardbound book by Bill Dahl that traces King’s life and career, including an extensive discography, and would be equally at home on a coffee table or a library shelf.  Though this isn’t a complete collection, it makes an excellent compilation King’s career with all its highs, lows, and little-knowns.