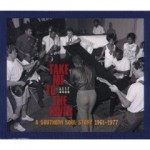 Take Me to the River is the best soul music box set of 2008, with a selection of 75 songs on 3 CDs, packaged with a lavishly illustrated and annotated 72 p. hardcover booklet. The goal of the compilers, Tony Rounce and Dean Rutland, was to set out in chronological order a selection of some of the best Southern soul music, noted for its “rich blend of blues and gospel, with a dash of soulful country added to the mix.”  Included are chart topping hits, such as “When a Man Loves a Woman” by Percy Sledge and Otis Redding’s “Try a Little Tenderness” (the previously unreleased first take), interspersed with “hideously obscure 45s that often didn’t get far beyond the limits of the cities in which they were recorded.”

In terms of defining Southern soul, the compilers set strict guidelines- “recordings made below the Mason-Dixon Line and, mostly, in the studios whose names are synonymous with the sound: Broadway Sound/Quinvy, Royal, Stax, Muscle Shoals Sound, Criteria, Fame, etc.” That is, studios located in Tennessee (Nashville, Memphis), Alabama (Muscle Shoals), Florida, Louisiana (Shreveport, but NOT New Orleans), Mississippi, and Georgia. Furthermore, they limited their selections to artists who either hailed from the South, or who recorded some of their most significant work there. Using the latter criteria, they were able to slip in Aretha Franklin’s “Do Right Woman, Do Right Man” and Etta James’s “I’d Rather Go Blind,” which were both recorded at Muscle Shoals in order to inject an “authentic” southern soul sound.

The three CDs each bear their own title. Disc One, “You Don’t Miss Your Water,” begins with William Bell’s 1961 version of that song and takes us through Oscar Toney Jr.’s “Without Love (There Is Nothing),” recorded in 1967. Other featured artists include Wilson Pickett, Otis Redding, Jarvis Jackson, Eddie Floyd, Charlie Rich, Toussaint McCall, June Edwards, Laura Lee, and Etta James. Disc Two, “The Rainbow Road” (as sung by Bill Brandon on track 3), begins in 1968 with Maurice & Mac’s “You Left the Water Running” and concludes with Gwen McCrae’s “You Lead Me On” (1970). Along the way are selections by Don Bryant, Shirley Walton, Ollie & the Nightingales, William Bell, Spencer Wiggins, Clarence Carter, Candi Staton, Joe Tex, Doris Duke, ZZ Hill, and Johnnie Taylor, among others. Disc Three, “The River,” sets off in 1971 with Marcell Strong’s “Mumble in My Ear” and concludes in 1976 with Geater Davis’s “I’ll Play the Blues for You.” This 1970s compilation also features Denise LaSalle, King Floyd, Al Green, Sam Dees, Ann Peebles, Bobby Womack, Millie Jackson, the Soul Children, Chet Davenport, Luther Ingram, and more.

If you already have a large soul music collection, this box set may not offer any new material. However, it is such a wonderful overview of southern soul music, thoughtfully programmed and expertly annotated, that both the novice and the soul music aficionado will reap the benefits. And, let’s face it- there just aren’t that many great compilations being produced anymore. This is a set that you’ll want to buy and hold on to for the long term.