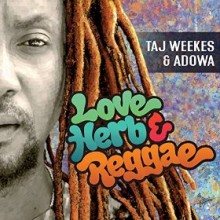 A play on the classic “sex, drugs, and rock ‘n’ roll” theme, Taj Weekes and his band Adowa’s fifth studio release, Love Herb & Reggae, is an effort to return to the roots of reggae by producing music filled with Rastafarian ideas of peaceful revolution. In this powerful album, Weekes brings his activism to his music, tackling social issues through smart lyrics and a progressive approach to reggae.

The themes of social justice are laid out on the opening track, “Let Your Voice,” which proclaims “let your voice be as loud as your silence.” Other songs include “Bullet From a Gun,” which begs for gun reform; “Life in the Red,” which warns about the destructiveness of capitalism; and “Here I Stand,” a story about the dangers of homophobia, which Weekes discusses in the following video:

There are also some more upbeat tunes on the album, such as the homage to the homeland, “St. Lucia On My Mind,” and the pure love song “Was It You.” While most songs don’t stray far from the more traditional reggae format that Taj Weekes & Adowa have presented before, Weekes claims to have made a breakthrough in his creative process, more carefully choosing chords and jumping from major to minor keys to match the topic and narrative of the lyrics with the melodies.