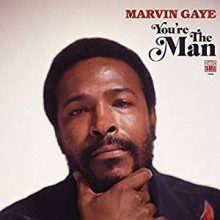 Today, Motown is celebrating the birth and the legacy of singer and instrumentalist Marvin Gaye by issuing his never released You’re The Man album. In 1972, Gaye’s “What’s Going On,” “Mercy Mercy Me (The Ecology),” and “Inner City Blues (Make Me Wanna Holler)”—singles from his universally acclaimed album What’s Going On—had each hit No. 1 on Billboard’s Hot Soul Singles chart. Gaye was quoted as saying, “For most people that would be a blessing. But for me the thought was heavy. They said I’d reached the top, and that scared me because Mother used to say, ‘First ripe, first rotten.’ When you’re at the top there’s nowhere to go but down. No, I needed to keep going up – raising my consciousness – or I’d fall back on my behind. When would the war stop? That’s what I wanted to know – the war inside my soul.” END_OF_DOCUMENT_TOKEN_TO_BE_REPLACED