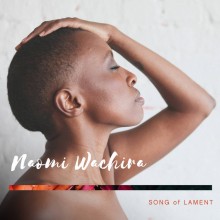 Between civil wars, natural disasters, environmental crisis, and refugees fighting for their lives across the globe, it is easy to feel surrounded by despair and violence. Seattle-based, Kenya-born artist Naomi Wachira certainly feels this way. On her sophomore release Song of Lament, she sings out looking for a connection by means of our mutual destruction: “I am the only one who thinks we’re gonna go up in flames?” (“Up In Flames”). Wachira, who grew up singing in gospel choirs, tries to reconcile faith and hope with insurmountable suffering on Song of Lament, which comes out June 2 on Doreli Music.

Wachira says that she was inspired to write Song of Lament when she read about 700 men, women, and children who drowned in the Mediterranean Sea while trying to reach a better life: “I felt so helpless watching people die needlessly, and I wanted to do something that would bring to light these issues.” The Afro-folk singer songwriter weaves empathy and a common thread of humanity through all the despair, whether questioning how people can use god to justify violence (“Where Is God?”) or urging those who feel life crashing in on them to continue fighting (“Run, Run, Run”).

Backed by acoustic guitar and bare bones percussion, for the most part Wachira’s effortless voice is in control here. A few songs have more involved instrumentation, such as “Beautifully Human,” which has an upbeat reggae beat as Wachira calls for seeing all life as sacred, tired of questions about who deserves to live:

“Don’t make me prove why I should be, why I belong, why I deserve to be here.”

“Up in Flames” also employs horns and drumset that add to the urgency and power of Wachira’s voice and desperation to find any spark of hope: “Where is kindness? Where is love?”

Though most of the tracks deal uniquely with global pain and suffering, Wachira still sees reason to seek light in the darkness. The opening and closing tracks, “Our Days Are Numbered” and “Think Twice,” are songs that beg for hope, as Wachira calls for a renewed responsibility to be kind, respect others, and show love before hate. As she says on her website, “while the sun does not discriminate between the good and the bad, fulfillment is found when we spend our days practicing kindness and wisdom.” In the end, Song of Lament is a cautionary message: evil will triumph over good if we let ourselves grow numb to the pain and suffering. Wachira wants the listener to turn into the despair instead of away from it, saying only through shared empathy will people find the energy to take action.