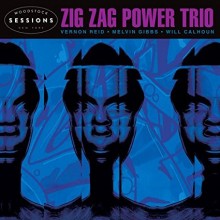 Zig Zag Power Trio’s Woodstock Sessions Volume 9 is a difficult album to classify stylistically. It is also rather startling if the personnel are merely taken at face value. Vernon Reid and Will Calhoun from Living Colour join bassist Melvin Gibbs, who might be most frequently associated with the Rollins Band. Thus, a listener who is only casually familiar with these musicians might expect the trio to be a hard rock band, if not a metal band. Granted, there is evidence of these stylistic expressions, and there are power trio rock influences from artists such as Jimi Hendrix. However, Zig Zag Power Trio also possess more eclectic influences. This is a jazz fusion record as much as it is anything else, a fact that is not surprising given that Gibbs and Reid played together in free-jazz drummer Ronald Shannon Jackson’s Decoding Society decades ago.

There will be guitarists who discover this recording due to Reid’s presence, and they will hear references to many of his influences—Jimi Hendrix; Bill Frisell, who collaborated with Reid on Smash & Scatteration in 1984; and David Torn, just to name a few. More than on any other recording, Reid’s ability to draw from a palette of influence consisting of hints of many players is supremely evident. Frankly, there are stellar individual performances by all three band members, but much of the virtuosity on this album lies in how the members interact with one another. Interaction is, of course, one of the attractive qualities in listening to any group of excellent musicians, but this recording serves as an impeccable example of interplay.

The cover of Junior Kimbrough’s “I Love Ya Baby” is the sole straight-ahead rock song on the album, and it is reminiscent of blues-rock jams à la Johnny Winter or Jimi Hendrix. However, Zig Zag Power Trio definitely puts their own stamp on the genre. “Professor Bebey,” which was previously released by Reid on his 2006 recording, Other True Self, is a departure from every other tune on the album with its African highlife feel. These two tracks are two of the most fun songs on the album. The remainder of the tunes are largely avant-garde in nature, so these two tracks are also the most accessible. However, this should not be interpreted as a negative review of the rest of the recording.

The cover of Ornette Coleman’s “Lonely Woman” is amazing. Not only is it a testament to the haunting quality of the original, but Reid and company put on a clinic in how to communicate musically with other band members. At times, Calhoun’s drumming is reminiscent of legend Billy Cobham, and Melvin Gibbs manages to tear the bass apart subtly, if not sneakily. “Lonely Woman” is an almost nine-and-a-half minute masterclass for any musician, and something new will be heard with each listen. ZZPT’s interpretation of Ronald Shannon Jackson’s “Eastern Voices Western Dreams” is another standout. The ambience is simply beautiful, and Reid and Gibbs play extremely well together—evidence of the fact that they were both playing this tune in Jackson’s band circa 1980. “Woodstock” and “David Bowie” are also songs of interest due to the atmospheric textures produced by heavily processed guitar sounds.

Woodstock Sessions Volume 9 is full of abundant surprises, with each of the members turning in career performances throughout. Combined with excellent musicianship, the sheer number of stylistic influences offers a little something for everyone. Having said that, fans of music that lies somewhere between progressive rock and jazz fusion (e.g. David Torn or Robert Fripp) will be very pleased. Considering the presence of tunes by Ornette Coleman, Pharoah Sanders, and Ronald Shannon Jackson, it is also fair to say that fans of avant-garde jazz in general should consider giving this group a thorough listen. So far, the Zig Zag Power Trio and their debut album are flying under the radar, but that should soon change. Let’s hope there’s another project in the works. 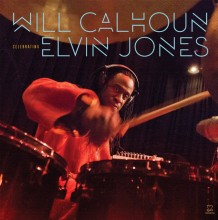 Drummer Will Calhoun has proven time and again that he’s comfortable performing any style of music, from the hard rock of the groundbreaking band Living Colour, of which he is a founding member, to jazz, fusion, funk, and hip hop. But for his solo albums, the Berklee School of Music graduate most frequently chooses to further his exploration of jazz. On his latest release, Celebrating Elvin Jones, Calhoun pays homage to the legendary drummer. As a member of the John Coltrane Quartet, Elvin Jones became one of the most influential drummers of all time, performing on the seminal album A Love Supreme, as well as many other albums for Coltrane and other artists ranging from Miles Davis to Ornette Coleman, Freddy Hubbard, McCoy Tyner, Quincy Jones, and J.J. Johnson. Jones also released dozens of his own projects between 1961-1999 on the Atlantic, Impulse!, Blue Note, and Vanguard labels.

Jones made a profound impact on Calhoun, who met the drummer at a Village Vanguard concert when he was just 14. The two maintained contact over the years until Jones’ passing in 2004. According to Calhoun, “Elvin connected my worlds. Although I saw him playing jazz, I felt rock and roll, I felt fusion, I felt African music. It sounds electric, it sounds acoustic, it sounds very African, it sounds very Latin, there are all these elements in there.” 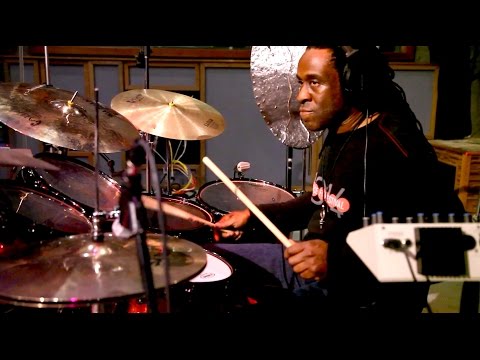 A bevy of seasoned veterans join Calhoun on Celebrating Elvin Jones, including Christian McBride on bass, Antoine Roney on sax, Carlos McKinney on keyboards, and Keyon Harrold on trumpet—all of whom either played with or were influenced by Jones. The album opens with the Jones original, “EJ Blues,” first released on Live in Japan 1978 by the Elvin Jones Jazz Machine. Clocking in at just over seven minutes, Calhoun’s arrangement is less than half the length of Jones’ live version, but certainly doesn’t disappoint in this energetic reading with extended solos by McBride and Harrold. On “Whew,” composed by bassist Wilbur Little who recorded it with Jones on the 1969 album Poly-Currents, McBride deftly weaves in and out of the complex rhythms and improvisations. Next up, the band lays into Coltrane’s “Harmonique,” included on Jones’ 1984 tribute album Brother John. Establishing a solid groove from the get go, Calhoun and McBride fully support Roney’s solo efforts.

From here the album takes a significant detour with “Sarmastah,” penned by Calhoun, who surprises listeners with an introspective 12-string acoustic guitar solo. Backed by Roney on soprano sax and McKinney on electric piano, Calhoun also covers percussion, drawing upon the “cymbal mystique” for which Jones was famous in this rhythmically complex track. Following are two great showcases for Calhoun’s technique: Wayne Shorter’s “Mahjong” and “Shinjitsu,” composed by Keiko Jones (Elvin’s wife), that’s a tour-de-force on which Calhoun unleashes a wide range of percussion during extended solos.

Two prominent guest artists are featured on the final tracks, which are definite highlights. The late Senegalese percussionist Doudou N’Diaye Rose (who died shortly after this recording) and five of his group drummers perform the intro on the arrangement of the traditional Japanese folk song “Doll of the Bride.” Calhoun then takes over, channeling Rose’s ability to create complex ever-changing rhythmic variations which propel his group through several improvisatory sections that showcase each member, before concluding in a flurry of percussive effects.

Keyboardist/composer Jan Hammer joins the group on the final track to revisit “Destiny,” which he performed on Jones’ 1974 album, On the Mountain. In a grand finale that’s nothing short of cataclysmic, Hammer drives the melody forward before handing the reins to Calhoun, who unleashes an explosive array of percussion, then brings the group back to conclude the piece with a satisfyingly progressive fusion.

In his tribute to Elvin Jones, Calhoun proves his own status as a master drummer with an impressive arsenal and intellectual curiosity that’s worthy of respect. Hats off to the other members of the group, who all contribute to this fantastic effort.