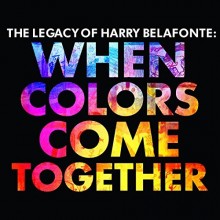 Title: When Colors Come Together… The Legacy of Harry Belafonte

With a career spanning over 60 years, Harry Belafonte is perhaps most famous for bringing Caribbean music into American pop culture. His 1956 breakout LP Calypso became the first album ever to sell more than a million copies, solidifying his spot in pop culture and music history.

Now, Legacy Recordings is celebrating his 90th birthday with the newly released compilation When Colors Come Together…The Legacy of Harry Belafonte. Belafonte himself chose the track list for the album, which includes one new recording alongside many classic and well-known Harry Belafonte songs. His son, David Belafonte, produced the album and wrote the liner notes. He appears with Harry discussing the album below:

A year after Calypso was released, Belafonte appeared in the film Island in the Sun, which explored racial tensions and interracial romance. A re-interpretation of a song from the film, “When Colors Come Together (Our Island In the Sun),” is the first track on the album and is sung by a children’s choir. The song is full of joy and optimism as the chorus of kids sing “Dark skin, light skin, brown eyes, blue / It’s what inside that should matter to you” while upbeat bongos resound behind their voices. In his liner notes, David Belafonte states that they reinterpreted the song “[using] the voices and performances of children to make the case that there is no human gene for racism; that what has been learned must be unlearned if the world is to ever truly know peace.”

Belafonte’s famous recording of the Jamaican folk song “Day-O (The Banana Boat Song)” also makes an appearance, as well as the buoyant dance song “Jump the Line.” Other classic Belafonte songs on the compilation include “Jamaica Farewell” and “Try to Remember.”

At a time when racial tensions continue to reign and protests rise up around the country, another folk song recorded by Belafonte, “All My Trials,” rings especially poignant. Used during social movements and protests in the 1950s and 1960s, the song is a testament to Belafonte’s activism during the Civil Rights Movement, as well as his friendship with Dr. Martin Luther King, Jr.

Belafonte has continued this passionate call for social justice throughout his career, advocating for causes such as the anti-apartheid movement and USA for Africa. He also served as a UNICEF Goodwill Ambassador and is currently the American Civil Liberties Union celebrity ambassador for juvenile justice issues. His social justice organization Sankofa.org has been involved with a number of important causes, most recently participating in a “Justice for Flint” benefit concert and working with Usher on his “Chains” music video and racial justice campaign.

When Colors Come Together…The Legacy of Harry Belafonte is a celebration of everything that Belafonte has accomplished in his wide-ranging career and life. Though prominently featuring the Calypso music that he became so well known for, the album also honors his career and legacy of social justice work through song choice and the re-recording of “When Colors Come Together (Our Island In the Sun).” It is clear that both Harry and David Belafonte are still passionate about addressing issues of racial prejudice and violence, and this compilation shows they are determined to continue embedding Harry Belafonte’s legacy in a whole new generation.