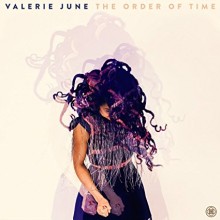 Title: The Order of Time

“Long Lovely Road” opens Valerie June’s atmospheric new album, The Order of Time, with a calming melody beckoning the listener to sing along with the chorus. Based out of Brooklyn, June collaborated with producer Matt Marinelli to create this second full album following her 2014 release, Pushin’ Against a Stone. On “Love Once Made,” June’s distinctive voice stands out as it beautifully breaks into her upper register on the chorus. The energy carries straight into “Shake Down,” an exciting call and response electric blues song supported by back-up vocals from June’s father and brothers:

The soothing drone of “If And” and the sustained ambient tones of “The Front Door” inspire a hopeful meditative response to the hard times everyone will inevitably encounter in life. “Man Done Wrong” draws on the lyrical repetition tradition found in blues music with a very minimalistic instrumental section and a prominent beat. “Astral Plane,” perhaps the most iconic song on this album, contemplates a spiritual purpose within the greater cosmic theme:

Dancing on the astral plane
In holy water cleansing rain
Floating through the stratosphere
Blind, but yet you see so clear

June remains front and center throughout this album, though she collaborated with keyboardist Pete Remm and vocalist Norah Jones. The deep electric guitar reverb introducing the orchestra of strings in “Just In Time,” the only song produced by Richard Swift, refocuses attention on the timely unity of humanity. Partnered well with “Two Hearts,” June sweetly blends her voice on “With You” with a fingerpicking guitar pattern, building into a more instrumentally complex arrangement. The album concludes with “Slip Slide on By” and “Got Soul,” two party songs with a brass band, soulful keys, and the potential to continue playing on repeat!